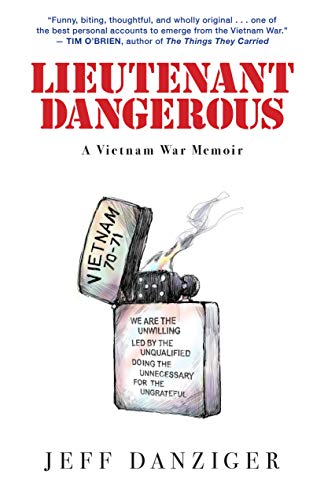 Book Description Paperback. Condition: New. Danziger, Jeff (illustrator). Language: English. Brand new Book. A must-read war memoir. with zero punches pulled, related by one of the most incisive observers of the American political scene. --KIRKUS (starred review) Funny, biting, thoughtful and wholly original. --Tim O'Brien, author of The Things They CarriedJeff Danziger, one of the leading political cartoonists of his generation, captures the fear, sorrow, absurdity, and unintended but inevitable consequences of war with dark humor and penetrating moral clarity. If there is any discipline at the start of wars it dissipates as the soldiers themselves become aware of the pointlessness of what they are being told to do. A conversation with a group of today's military age men and women about America's involvement in Vietnam inspired Jeff Danziger to write about his own wartime experiences: "War is interesting," he reveals, "if you can avoid getting killed, and don't mind loud noises." Fans of his cartooning will recognize his mordant humor applied to his own wartime training and combat experiences: "I learned, and I think most veterans learn, that making people or nations do something by bombing or sending in armed troops usually fails." Near the end of his telling, Danziger invites his audience--in particular the young friends who inspired him to write this informative and rollicking memoir--to ponder: "What would you do? . . . Could you summon the bravery--or the internal resistance--to simply refuse to be part of the whole idiotic theater of the war? . . . Or would you be like me?". Seller Inventory # AAT9781586422738

Book Description Paperback. Condition: new. Danziger, Jeff (illustrator). Paperback. Most readers will know Jeff Danziger as a brilliant cartoonist. Lieutenant Dangerous shows that he is a brilliant writer as well. Full of mordant observations and absurdist escapades, this memoir of his army service reads like a real-life Catch 22 -- with Danziger as the Captain Yossarian of the Vietnam War. Lieutenant Dangerous joins the small shelf of must-read books for a sense of what it was really like to be a soldier in America's most unpopular war. -- Max Boot, author of The Road Not Taken: Edward Lansdale and the American Tragedy in Vietnam Not since Tobias Wolfs' In Pharoah's Army has there been such an honest and self-aware war memoir to come out of the Vietnam conflict. Jeff Danziger's Lieutenant Dangerous belongs on the shelf next to Wolf, Tim O'Brien's The Things They Carried , and Karl Marlantes' Matterhorn . -- Tom Bodett, Author and radio anomaly Shipping may be from multiple locations in the US or from the UK, depending on stock availability. Seller Inventory # 9781586422738