Items related to Son of the Rough South: An Uncivil Memoir

Fleming, Karl Son of the Rough South: An Uncivil Memoir

Son of the Rough South: An Uncivil Memoir 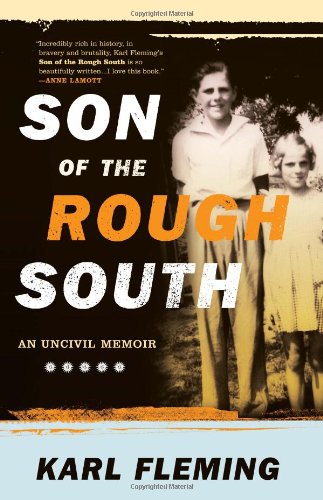 Legendary civil rights reporter Karl Fleming was born in North Carolina's flattest, bleakest tobacco landscape. Raised in a Methodist orphanage during the Great Depression, he was isolated from much of the world around him until an early newspaper job introduced him to the era's brutal racial politics and a subsequent posting as Newsweek's lead civil rights reporter took him to the South's hotspots throughout the 1960s: James Meredith's enrollment at the University of Mississipi, the 1963 Birmingham church bombing, the assassination of Medgar Evers, the murders of three civil rights workers in Philadelphia, Mississippi, and more.

On May 17, 1966, Fleming was beaten by black rioters on the streets of Los Angeles. Newsweek covered the incident in their next issue, and here's what they wrote: "That he was beaten by Negroes in the streets of Watts was a cruel irony. Fleming had covered the landmark battles of the Negro revolt from Albany, Ga., to Oxford, Miss., to Birmingham, Ala., and numberless way stations whose names are now all but forgotten.... No journalist was more closely tuned into the Movement; once when a Newsweek Washington correspondent asked the Justice Department to name some Dixie hot spots, the Justice man replied, ‘Ask Fleming. That's what we do.'"

In Son of the Rough South, Fleming has delivered a stunning, revealing memoir of all the worlds he knew, black, white, violent, and cloistered — and a deeply moving read for anyone interested in any rough South.

Karl Fleming is married to the journalist, commentator and novelist Anne Taylor Fleming. They live in Los Angeles.

Fleming covered the social struggles of the 1960s for Newsweek as its chief civil rights reporter. What makes this bracing memoir more than a simple morality tale about good activists versus evil traditionalists is Fleming's deep connection to Southern culture: raised in crushing poverty in smalltown North Carolina during the Depression, he was given over to a church orphanage at the tender age of eight when his mother could no longer afford to take care of him. Stumbling into journalism almost by accident, Fleming (now the L.A.-based spouse of Ann Taylor Fleming) began to see the racist culture around him in a new way, and vowed to expose the truth. Following this youthful and idealistic declaration is a harrowing and brutally honest account of Fleming's experiences on all sides of the civil rights battle: oafish, vile Klansmen as well as inspirational leaders, activists and everyday people struggling for equality are here, but more compelling are Fleming's own struggles to understand his place as a white Southerner in the midst of the chaos, fear, hatred and optimism that marked the South in the early 1960s. Eventually, the violence, both personal and political, overwhelmed Fleming, and he recounts in sobering detail his struggle to make sense of his life and his past in the years following the end of the Civil Rights movement. The territory may be familiar, but Fleming provides a complex and fresh perspective. (May)
Copyright © Reed Business Information, a division of Reed Elsevier Inc. All rights reserved.

1. Son of the Rough South: An Uncivil Memoir

2. Son of the Rough South: An Uncivil Memoir Fleming, Karl