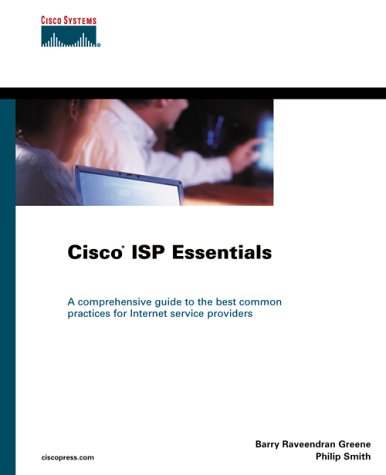 Cisco IOS Software documentation is extensive and detailed and is often too hard for many Internet service providers (ISPs) who simply want to switch on and get going. Cisco ISP Essentials highlights many of the key Cisco IOS features in everyday use in the major ISP backbones of the world to help new network engineers gain understanding of the power of Cisco IOS Software and the richness of features available specifically for them. Cisco ISP Essentials also provides a detailed technical reference for the expert ISP engineer, with descriptions of the various knobs and special features that have been specifically designed for ISPs. The configuration examples and diagrams describe many scenarios, ranging from good operational practices to network security. Finally a whole appendix is dedicated to using the best principles to cover the configuration detail of each router in a small ISP Point of Presence.

Barry Raveendran Greene, Senior Consultant, Cisco Systems, Corporate Consulting, Office of the Chief Technology Officer (CTO). Barry's current topics of interest are ISP Operations and Security, developing the features, functionality, and techniques to enhance an ISP's success. Barry has been with Cisco since 1996, traveling to all parts of the world helping ISPs and Telcos build the Internet. Barry is the co-coordinator for the Cisco ISP Workshop Program, designed to empower engineering talent in ISPs all over the world. He has more than 22 years experience in systems integration, security, operations, maintenance, management, and training on a variety of computer, internetworking, and telecommunications technologies.

Philip Smith joined Cisco Systems in January 1998. He is a member of the Internet Architectures Group of Consulting Engineering, reporting into the Office of the CTO. His role includes working with many ISPs in the Asia Pacific region and the rest of the world, specifically in network strategies, design, technology, and operations, as well as helping with network configuration and scaling. He is also involved in training ISP engineers, co-founded the Cisco ISP Workshop Program, and provides ISP training at conferences and other networking forums around the world. Prior to joining Cisco, he spent five years at PIPEX (now part of UUNET's global ISP business), the UK's first commercial ISP. He was one of the first engineers working in the commercial Internet in the UK and played a key role in building the modern Intenet in Europe. Philip holds a Doctor of Philosophy and has a First-Class Honours Degree in Physics. He lives in Brisbane, Australia.

Book Description Cisco Press, 2002. Condition: Good. A+ Customer service! Satisfaction Guaranteed! Book is in Used-Good condition. Pages and cover are clean and intact. Used items may not include supplementary materials such as CDs or access codes. May show signs of minor shelf wear and contain limited notes and highlighting. Seller Inventory # 1587050412-2-4