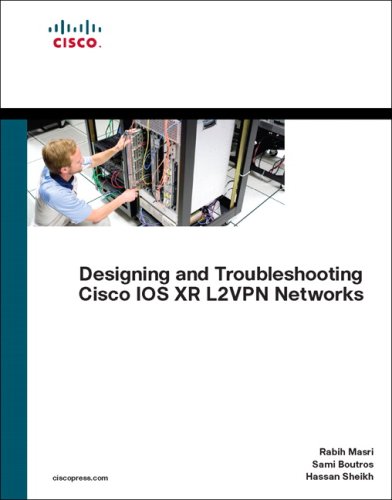 Learn about Cisco IOS-XR operating system (release 3.4) from its primary designers while mastering the opportunities in the system

Designing and Troubleshooting Cisco IOS XR L2VPN Networks is a comprehensive book on the new, state-of-the-art operating system from Cisco. Within this exciting new operating system are features that help keep Cisco, and their products, competitive with challengers like Juniper that have made some ground in the enterprise-level router markets. L2VPN is a key customer feature in IOS newly supported now in IOS-XR, and the book details the designing and troubleshooting of L2VPN in IOS-XR, as well as the L2VPN interoperability between IOS and IOS-XR. The book focuses on the design and troubleshooting of the new IOS-XR, and covers solutions on topics like Ethernet Over MPLS (EoMPLS), Ethernet Interworking, and Ethernet Local Switching, high availability, QoS, and interoperability between IOS and IOS-XR. Topic Information:

Rabih Masri is a Software Engineer in software development testing at Cisco Systems. He is the project lead for the L2VPN IOS-XR project on GSR. Rabih designed and implemented the L2VPN IOS-XR software verification test plan and strategy.

Sami Boutros is the technical lead in the IOS-XR software development routing group responsible for L2VPN and MPLS Technologies.