Items related to Physics, or Natural Hearing: Aristotle (William of... 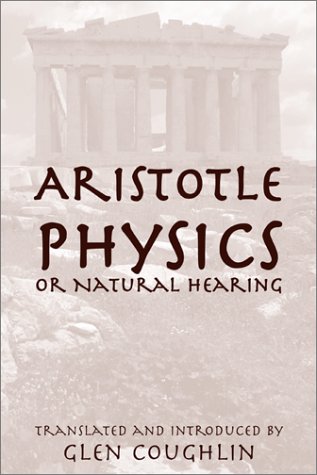 The Physics is the fundamental text in Western philosophy, as Heidegger said. The text analyzes the most common features of the natural world, such as motion, place, and time, grounding its arguments in common experience and proceeding to a proof of the prime mover.

As the first part of Aristotelian natural philosophy, the Physics is necessary to an understanding of the later natural works, including On the Soul; its proof of the first mover is presupposed to Aristotle's Metaphysics; its arguments that nature acts for an end are assumed by Aristotle's ethical and political works; and its analyses of change enter into Aristotle's discussions of knowing and so finally into an understanding of his Organon. Given Aristotle's influence, the effect of the Physics on later philosophical and theological developments cannot be overemphasized.

This translation uses simple language without completely discarding the traditional renderings of Aristotelian terminology. It attempts to imitate Aristotle's concrete style and to be consistent in its translation of terms. The edition includes the translation, introduction, glossary, index, and explanatory notes.

The William of Moerbeke Translation Series, under the general editorship of Stuart D. Warner, is devoted to publishing translations of important works - ancient, medieval, and modern - regardless of the original language, in every area of scholarly endeavor, including philosophy, political science, theology, literature, history, economics, and law. The aim of the series is to bring the reader as close as possible to the letter and spirit of the original work. Each volume will contain a scholarly introduction and notes. We welcome all inquiries and suggestions. Physics, Or Natural Healing is the first volume of this series.