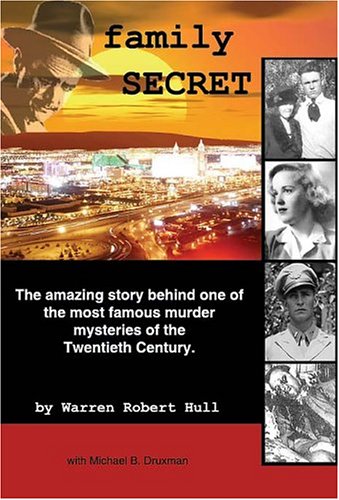 On June 20, 1947 one of the most notorious gangsters of the twentieth century, Benjamin "Bugsy" Siegel, was murdered in the Beverly Hills mansion of his mistress, Miss Virginia Hill. While there have been numerous theories in regard to who actually killed "the father of Las Vegas," the fact remains, the Siegel murder case is still officially unsolved...until now. In 1941, when Bob MacDonald married Betty Ann Rockwell, it appeared as though their relationship was the start of a very majestic affair. The teens were from the upper class of Southern California society, exceptionally good looking, and by all accounts it seemed to be foreordained that they would live a full and happy life. MacDonald's father, Archibald, was the right-hand man to America's wealthiest man, Howard Hughes, Jr., while Betty Ann's mother, Gaynell Rockwell-Applegate, was a woman of "new money." At a glance, it seemed as if the couple should have lived a life with a storybook ending. Sadly, in 1947, the life of splendor expected for the couple turned into a family nightmare with horrendous consequences. On September 13, 1947, without apparent reason or motive, Bob MacDonald, age 27, took a .30 caliber, army type, carbine rifle and shot his wife, Betty Ann, age 24, two times-once in the back and once in the head. After killing his wife, MacDonald then turned the weapon on himself and committed suicide. The high society community the couple was a part of was mortified by the event. People wanted to know what could have possessed Bob MacDonald to do such a thing. How could this man, the son of a millionaire, a war hero, the winner of three Purple Hearts, the Silver Star and the Bronze Star, and the father of two children, commit such a gruesome act? What could have possibly driven him to the type of madness where he would kill his wife and then take his own life? In the hours following this terrible event, the couple's parents, using their financial capital, powerful political ties, social contacts and business experience, formed a consortium of secrecy to ensure the public would never find the answer to the question of why Bob MacDonald did what he did. The families agreed to keep MacDonald's motives for killing his wife and then himself a... Family Secret. The shroud of secrecy, which had been in place over the intimate elements of this amazing story for over half a century, was lifted in 1996, when one of the "family insiders" made a dramatic deathbed confession to Family Secret author, Warren R. Hull. Honoring his father's request to tell the world the secret behind the Siegel killing, Hull provides an incredible explanation as to who murdered Benjamin Siegel, and more importantly, how and why the murder was never solved by the police!

Warren Robert Hull was born in Tacoma, Washington, to Marion and Robert Hull. After spending seven years in the northwest, his family moved to the greater Los Angeles area, eventuallty settling in the high desert where Warren attended Apple Valley High School. After graduation, Hull enrolled at Victor Valley College where he received his AA degree in Liberal Arts and then attended the University of Arkansas, in Fayetteville.

Warren served three years with the Naval Security Group while attached to the National Security Agency (NSA). Upon completion of his tour of duty, he returned to school where he earned a BS degree in Exercise Physiology and then entered into the field of education as a teacher and coach. In 1995, Hull earned his MA degree in Health, Recreation and Physical Education from Adams State College in Alamosa, Colorado and later went on to obtain his Secondary School Administrative Credential from Heritage College in Toppenish, Washington.

He is presently a high school administrator in the Pacific Northwest, where he and his wife Annette, who is a teacher and certified athletic trainer, live with their three dogs: Knute, Autumn, and MoMo.