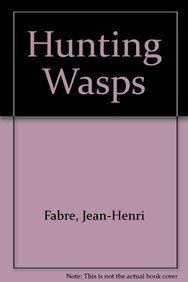 Hunting Wasps by J. Henri Fabre Quality Paperback 1-58776-028-2 List Price: $16.00 Fabre is the Homer of the insects. - Victor Hugo. Fabre is one of the glories of the civilized world... one of the most profound admirations of my life. - Maurice Maeterlinck. Fabre is a savant who thinks like a philosopher and writes like a poet. - Rostand. Fabre has the power to introduce the reader into the insect world as few if any others have been able to do. - New York Herald Tribune. In the field of insect study, the works of J. Henry Fabre are classics; in the field of literature, they hold a special place of their own. - Edwin Way Teale

"The patience and the nicety of M. Fabre's observations are indeed amazing. His eyes see, and they see magical marvels."

Considered "The Homer of Insects," Fabre's work laid the foundation for virtually all subsequent work in the field of entomology. Jean-Henri Fabre (1823-1915) is well known for his popularization of insect natural history, especially in the ten volumes of Souvenirs Entomoligiques.

Although a reclusive amateur, with no scientific training, he was an acute observer of insect behavior. He combined his observations (most made in his own backyard) with a humanistic writing style that made his books popular, at least later in his life; during most of his life, the successive volumes of Souvenirs Entomologiques attracted only mild attention. Fabre was 84 when the last volume appeared, and soon afterward he was "discovered." He was elected to numerous scientific societies, provided a government pension, and even the President of France came to visit him.