Items related to Damascus Diary: An Inside Account of Hafez al-Assad's...

Damascus Diary: An Inside Account of Hafez al-Assad's Peace Diplomacy, 1990-2000 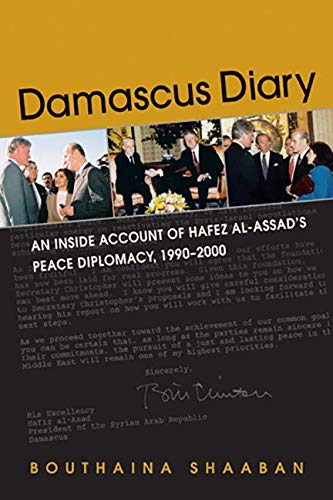 Bouthaina Shaaban worked closely with Syria's president Hafez al-Assad from 1990 until the time of his death, serving as both official interpreter and adviser. Her new book, part memoir and part historical account, takes the reader behind the closed doors of the Syrian Presidential Palace to provide uniquely Syrian perceptions of the failed Arab-Israel peace talks. Sharing firsthand stories of relationships (her own and Assad's) with members of the Bush and Clinton administrations, and drawing on previously unavailable minutes and other documents from the Syrian presidential archives, Shaaban takes us from the early Syrian-US engagement in 1990-1991 to the three Assad-Clinton summits in 1994-2000. In the process, she includes intriguing revelations about the Rabin Deposit, the April Understanding on Lebanon, and the 1998 Track II effort with Israeli prime minister Benjamin Netanyahu. Bouthaina Shaaban offers the first account of these negotiations to come from a Syrian insider―an essential contribution to our understanding of the enduring conflict in the Middle East.

Bouthania Shaaban has been professor of English literature at Damascus University since 1985. In the 1990s, she served as principal interpreter for President Hafez al-Assad and was an active participant in the Middle East peace process. Dr. Shaaban's life and work are the subject of Ziad Hamzeh's film Woman, which was awarded the Golden Palm for best film at the 2008 Beverly Hills Film Festival.

This is a remarkable book.... Authoritative, moving and personal. (Peter Clark, Asian Affairs)

Anyone interested in the Arab world and particularly in the Arab Near East should read [this book].... An invaluable primary source of information quite different from the 'memoirs' of retired officials in the United States. (Ziad Hafez, Contemporary Arab Affairs)

This book offers a rare insight into the outlook and values of the regime elite. It is especially instructive both in understanding the present and recent behavior of this regime, and in assessing hopes, if any remain, for a compromise peace between Assad’s Syria and Israel. (Jonathan Spyer, Israel Journal of Foreign Affairs)