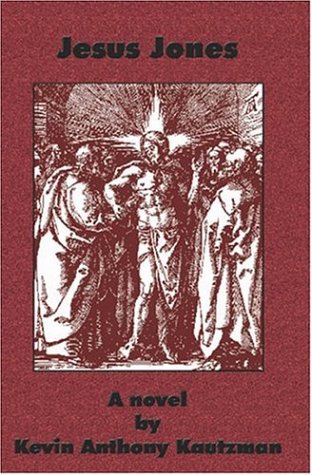 Jesus Jones tells the story of Thomas Pilger, a defective twenty-something from Minnesota. Thomas is obsessed with two things: Catholicism, to which he converted at 16 - 'because I was already guilty and figured I'd fit in' - and... You know those little cards you get in the mail, addressed to 'resident,' the ones that have coupons for 19.95 OIL CHANGES and FREE LUBE JOBS, and on the other side sport sad-looking pictures of missing people? Thomas is obsessed with those. He keeps them in duplicate in his room, alphabetized by the missing persons' first names. He uses the cards as wallpapering, in fact. So when father Simile - whom Thomas calls father Smiley - gives an impassioned Ash Wednesday sermon about how the world has 'lost Jesus,' and later that day a card comes in the mail with the ambivalent face of a missing man named Jesus Jones, who's been gone for 10 years, lost in a sea of faces, it isn't even a matter of time for Thomas to make his weird connection and decide that, for Lent, he's going to find Jesus. He visits father Smiley - eh... Simile - that same evening and, in a simple turn of events, steals the blessed Catholic's minivan, which Thomas christens The Great White Whale. So Thomas' Quest begins, and it doesn't take long for the road to swallow him up. Intended to be both satirical and informative, 'Jesus Jones' offers a mural of eccentric beliefs about one of the most loaded mytho-religious words in the world: Jesus. Thomas' Quest takes him into the Yogic school of a smiling Irishman named Abbey, through the occult revelations of Desmond and Molly Jones, a pair of tantra-practicing sex magicians who front a musical project named Damascus Throng, into the twisted mind of a French Canadian named Dag who believes that the pastor of a mega-church in Boise has found the cup of Rene D'Anjou, which may very well lead to the Grail itself, and out to Seattle, where he meets a group of Real Catholics who keep their very own Pope secluded in the woody hills. Filled with interesting characters and mythic meaning, Jesus Jones has something for everybody who has ever wondered how so many people can have so many beautiful, beautifully different ideas... all based on the same, loaded Word.

Jesus Jones is my third and most recent novel. With it I portray religion -- the yearning for personal knowledge of God -- and religious pathology of modern, Midwestern America as I've come to know it.

Kevin Anthony Kautzman was born in Bismarck, North Dakota, grew up in Mandan, North Dakota, and studied at the University of Minnesota, where he received his Bachelor's degree in 2003 in History and Philosophy. He has traveled in Europe and North America, practices Aikido, and works as a professional communications consultant. He acts with the Camden Civic Theatre in north Minneapolis, speaks German, and enjoys writing. He has written three novels, two plays for the stage, creative nonfiction pieces, and music reviews. He lives in the Twin Cities.

Book Description Imprintbooks, 2003. Condition: Good. Shows some signs of wear, and may have some markings on the inside. Seller Inventory # GRP35045323