Items related to The Critical Calling: Reflections on Moral Dilemmas... 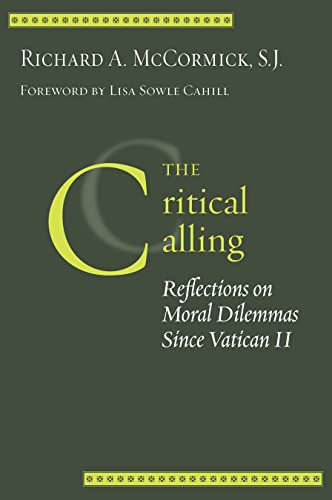 When Richard A. McCormick's The Critical Calling was first published, Andrew M. Greeley commented that "in years to come scholars will look back on Father McCormick's work and say, 'This was a man who knew what he was talking about!'" In this reissue, with a new foreword by Lisa Sowle Cahill, both first-time readers and those opening the pages for a return visit with an honored friend will find Greeley's characterization remains valid.

Father McCormick begins The Critical Calling with his personal affirmation of the work of Vatican II: "I believe the Council was a work of the Spirit―desperately needed, divinely inspired, devotedly and doggedly carried through." Yet, he stresses this was no uncritical endorsement of everything the Council did and said. Part One includes a discussion of fundamental moral theology that looks at the relationship between the church hierarchy and individual moral decision making and several chapters addressing issues precipitated by actions involving Cardinal Josef Ratzinger, now Pope Benedict XVI. Part Two focuses on practical and pastoral questions that touch on contemporary concerns ranging from abortion to AIDS, divorce, homosexuality, and teenage sexuality.

Cahill suggests that "those who lived through the tumultuous 1960s and '70s" as well as "those who came to maturity after the Council" will find this book to be an accurate and evocative reflection of the passions that imbued all those early debates and a helpful explanation why those passions ran so high. All readers will benefit from the wise insights into the controversies of that era and the more recent struggles, challenges, and debates that confront today's church.

Richard A. McCormick, SJ (1922-2000) was one of the leading U.S. Roman Catholic moral theologians of the 20th century. He was the John A. O'Brien Professor of Christian Ethics in the Department of Theology at the University of Notre Dame until his retirement in 1999, and a former senior research scholar of the Kennedy Institute of Ethics. Father McCormick was well-known for his annual Moral Notes published in the Jesuit quarterly Theological Studies from 1965 to 1984.

"Richard McCormick was a moral theologian of the very first rank, demonstrating all the qualities he said we should expect of Catholic moral theology of the future. He was eminently insightful, realistic, scientifically informed, straightforward, ecumenical, and catholic in every sense of the word. The book is an impressive representation indeed of all that Father McCormick contributed to the Church over the past three decades and more."―Richard P. McBrien, Crowley-O'Brien Professor, University of Notre Dame

2. The Critical Calling - Reflections on Moral Dilemmas Since Vatican II

Book Description 2006. Paperback. Condition: New. Paperback. When Richard A. McCormick's "The Critical Calling" was first published, Andrew M. Greeley commented that "in years to come scholars will look back on Father McCormick&#.Shipping may be from multiple locations in the US or from the UK, depending on stock availability. 414 pages. 0.585. Seller Inventory # 9781589010833

Book Description 2006. Paperback. Condition: New. Paperback. When Richard A. McCormick's "The Critical Calling" was first published, Andrew M. Greeley commented that "in years to come scholars will look back on Fathe.Shipping may be from our Sydney, NSW warehouse or from our UK or US warehouse, depending on stock availability. 414 pages. 0.585. Seller Inventory # 9781589010833