Items related to Memoirs of a Coxcomb

Cleland, John Memoirs of a Coxcomb

Memoirs of a Coxcomb 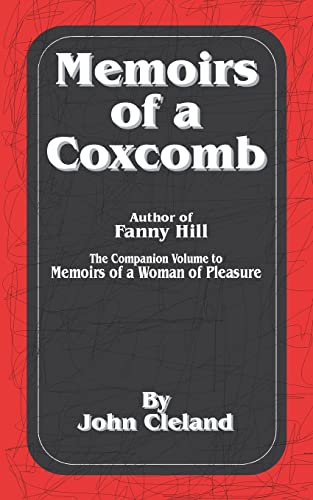 The companion volume to Memoirs of a Woman of Pleasure (Fanny Hill) in an unexpurgated edition with an analysis of the life and works of John Cleland.

The woman of pleasure was not a figment of John Cleland’s imagination. She lived and moved among the colorful figures of 18th century England. And she had her male counterpart: the coxcomb . . . man of pleasure.

John Cleland knew this life intimately. In Memoirs of a Coxcomb, as in Fanny Hill, he wrote of it with complete frankness and honesty.

Suppressed until recently, it is a major work of exotica.

John Cleland was penniless when he met Ralph Griffith, a bookseller and became partners in a publishing venture. Cleland was to distill his experiences and write a book called Memoirs of a Woman of Pleasure, a novel that was to become the most sensational piece of erotica in English literature. In 1747 Fanny Hill was launched into circulation and immortality.

Both men achieved their financial objectives - then came the repercussions.

Eighteenth century English aristocrats were austere on the surface and licentious underneath. The members of the Privy Council asked how Cleland could be silenced. The answer was simple. He needed money. So the Privy Council gave him a pension exacting his promise not to write a sequel to Fanny Hill.

For a while the scheme worked. Cleland retired to the country, amusing himself by writing political pamphlets, poetry, and plays. None of Cleland’s neighbors realized that his peaceful, scholarly man was England’s foremost living pornographer.

"Hal Gladfelder has done all those interested in eighteenth-century literature, and in the history of sexuality and gender, a great service with this unprecedented scholarly edition of Memoirs of a Coxcomb. The elegant critical introduction, judicious textual notes, and well-chosen appendices—both useful and diverting—make this an invaluable text." - Ann Louise Kibbie, Bowdoin College

"This is an excellent edition of Cleland's intriguing Memoirs of a Coxcomb, a novel that offers a sort of masculine version of his more famous Memoirs of a Woman of Pleasure. This book will add a new dimension to discussions of the novel, eighteenth-century culture, masculinity, and gender." - Laura Rosenthal, University of Maryland

Published in 1751, John Cleland’s second novel (after the notorious Memoirs of a Woman of Pleasure) is a witty and complex portrait of aristocratic British society in the mid-eighteenth century. Its young protagonist, Sir William Delamore, meets, falls in love with, and pursues the mysterious heiress Lydia. Rather than a conventional romance, however, the novel is an acerbic social satire, and Sir William an unreliable narrator and incomplete hero. In its experiments with narrative form and its sophisticated examination of masculine identity, Memoirs of a Coxcomb is an important marker in the development of the eighteenth-century novel.

This Broadview edition includes a critical introduction that places Memoirs in the context of Cleland’s life and literary career. Also included is a broad selection of appendices, including Tobias Smollett’s review of the novel, selections from Cleland’s criticism, three texts by Lady Mary Wortley Montagu, and contemporary documents on masculinity (particularly the figures of the coxcomb and the fop) and prostitution.

1. Memoirs of a Coxcomb

2. Memoirs of a Coxcomb (Paperback or Softback)

3. Memoirs of a Coxcomb (Paperback)

4. Memoirs of a Coxcomb

5. Memoirs of a Coxcomb

6. Memoirs of a Coxcomb

7. Memoirs of a Coxcomb

8. Memoirs of a Coxcomb