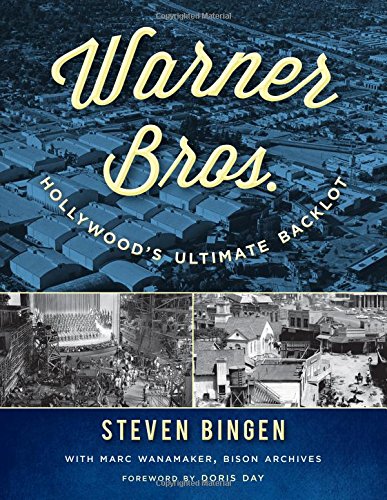 Movie studios are the wondrous, almost magical locales where not just films, but legends, are created. Unfortunately, these celebrity playgrounds are, and always have been, largely hidden from public view. Although some movie studios offer tours, few guests from outside the Hollywood community have ever been witness to the artistry, politics, and scandals that routinely go on behind the soundstage walls and away from the carefully orchestrated scenes visible to them from their tram carts.

In this book, studio staff historian and Hollywood insider Steven Bingen throws open Hollywood’s iron gates and takes you inside the greatest and yet most mysterious movie studio of them all: Warner Bros. Long home to the world’s biggest stars and most memorable films and television shows, the Warner Bros. Studio lot functions as a small city and is even more fascinating, glamorous, and outrageous than any of the stars or movies that it has been routinely minting for more than ninety years. Accompanied by stunning behind-the-scenes photos and maps, and including a revealing backstory, this book is your ticket to a previously veiled Hollywood paradise.

Steven Bingen is a historian, screenwriter, and former archivist at Warner Bros. Originally a native of Seattle, Bingen has written and contributed to dozens of books, articles, and documentaries on Hollywood history. He coauthored MGM: Hollywood’s Greatest Backlot, the first significant book ever published about a movie studio lot. He lives in the world’s largest backlot, also known as Los Angeles.

In this well-organized and meticulously reasearched book, he describes the start of the company, how the movie studio in Burbank came into being, and how it is used to produce films and TV shows. The photos contained are absolutely amazing. . . .This really enjoyable read makes history come alive while also giving one an idea of what a lot of work it takes to create 'movie magic'. Highly recommended for all who enjoy film history, California history, and Warner Bros. movies. (Library Journal)

Saved from early bankruptcy by a dog - box-office wunderpoock Rin Tin Tin - the Burbank studio named after founding siblings Harry, Albert, Sam, and Jack has had a storied history. Bingen's handsome coffee table tome tells that story, with great archival photos and a film historian's rigorous attention to detail - from backlot architecture to the actors, directors, designers, and costumers who walked, and biked, among offices and soundstages and commissaries to make movies that would capture a nation's imagination. (Philadelphia Tribune)

I’ve dreamed of walking through those magic-filled backlot sets and workshops. This book allows one the delight of reliving the many layers of illusion created on the studio property. I can feel the ghosts of heroes, villains, gorgeous ladies, skilled artisans, and other beloved characters that inhabited this place. Steve Bingen’s book is the next best thing to being there. (Ben Burtt, Academy Award–winning sound designer and historian)

I grew up exploring the backlot, as my grandfather, Harry Warner, and his brothers founded the studio, and my writer/producer father, Milton Sperling, gave me errands to do on Saturdays on the lot. If you've ever dreamt of exploring a movie studio, Warner Bros.: Hollywood's Ultimate Backlot is the book that will take you into that magical world! (Cass Warner, writer and producer)

This book is like a magic carpet, taking movie buffs on a journey through the history of Warner Bros., from its dressing rooms and craft departments to its legendary backlot. What a wonderful compendium of history, anecdotes, and even gossip. I loved every bit of it. (Leonard Maltin)

I was in the saddle at Warner Bros. for many years, so reading this book brought back lots of memories for me. I’m certain that for the millions who know the studio only through the movies and TV shows which were shot there, exploring the real place will prove to be just as fascinating as it was for me. I take great pride in having been a part of the Warner Bros. story. (Clint Walker, star of WB’s first hit TV show, Cheyenne)

This book is a testament to the miracles of classic studio filmmaking. In these pages you will visit all the studio departments—business, artistic, and technical—that contribute to Warner Bros. movies. You will also learn how craftsmen put down stakes to build landscapes of the Old West, the streets of New York, jungle lagoons, or any other place imaginable. This book is literally ‘the stuff that dreams are made of.’ (Craig Barron, Academy and Emmy Award–winning visual effects supervisor and historian)

PRAISE FOR MGM: HOLLYWOOD'S GREATEST BACKLOT
In my opinion, there can never be enough books about the golden age of Hollywood. Whether I'm reading as researcher, writer, or fan, MGM: Hollywood's Greatest Backlot is a spectacular resource. It’s comprehensive, compelling, and takes you on the greatest guided tour—both visually and narratively—of one of the greatest Hollywood studios. (Jennifer Niven, author whose work includes American Blonde and Velva Jean Learns to Drive)

Warner Bros.: Hollywood’s Ultimate Backlot works tirelessly to reveal the historical and cinematic history of the infamous movie studio. Steven Bingen. . . .spins a tale of movie magic and takes readers through a 'studio book tour.' Bingen is aided by his personal history of acting as a tour guide at the Warner Bros. studio as well as serving as a staff historian. He incorporates a fun, eloquent prose into the text, the way he would as a guide a tour of the lot. He also features maps scattered throughout the text, colorfully marking soundstages and backlots. . . .Bingen, together with his team of writers and researchers, carefully analyze the history, evolution and meaning of the lots, as they have played host to a large number of television shows, shorts and films. . . .[T]he book permits an opportunity to marvel in the meaning of its space. The book also provides an appendix of production shots, as complete as possible granted the history of the studio, commencing as early as 1928. . . .The book permits the opportunity to travel back and discover the history associated with the sets and buildings. (Tribute)

Ever wish you could sneak into Warner Brothers backlot and learn the studio’s secrets? Bingen’s handsome, coffee table book enables you to do just that. You’ll tour the soundstages, offices and acreage, finding out the glamorous film history. Fascinating anecdotes abound. . . .You’ll discover details of so many facets of filmmaking, including set design, props, costumes and more. There are loads of interesting photos to peruse. (Pop Culture Classics)