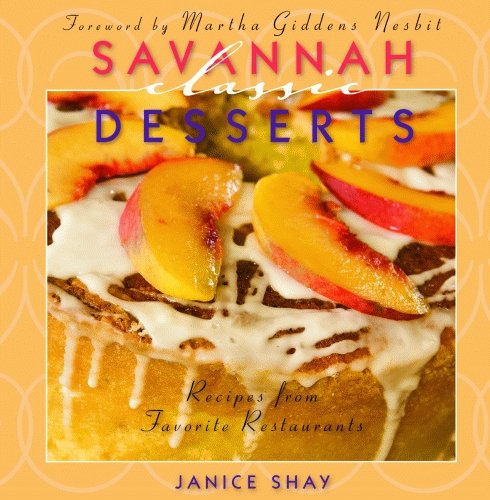 Classic Savannah desserts have been modified and modernized in this gift cookbook and enhanced by appetiteinducing color photography. The city's original settlers preferred to start their desserts with custard, and today there is no shortage of requests for crï¿½me brï¿½lï¿½e, crï¿½me caramel, and the most popular, the Savannah trifle. This cookbook showcases the sweets, restaurants, and fresh, local ingredients that make Savannah scrumptious. Whether it's Soho South Cafï¿½'s Berry Shortcake or The Lady and Sons' Pumpkin Gooey Butter Cakes, there is something for everyone to indulge in. History, musings, and stories accompany the many award-winning recipes, making this first-class cookbook a restaurant guide as well.

This collection of recipes is coupled with a history lesson on the most popular restaurants and cafés in the city. B. Matthews was the first tavern in Georgia in 1792 and is constructed from old ship parts. Their B 52 Cheesecake is more up-to-date than their building, using Irish Cream liqueur and Heath bar crunch cookies. Vic's on the River likes to share its traditional Southern food with customers, such as its Sweet Potato Crème Brûlée. The former cotton warehouse also shares a piece of history from the Civil War. Union soldiers mapped out Sherman's march from Tennessee through Georgia on one of the walls. Part of the original map is still on display.

As the city expanded, so did their selection of restaurants. Art lovers enjoy the atmosphere of the Soho South Café and its Brownie Decadence. Health-conscious diners enjoy the wholesome flavor of the Firefly Café's Southern Comfort Peach Bread Pudding and the Sapphire Grill's Cocoa-infused Crème Caramel. Quaint boardinghouse-style restaurants offer more traditional sweets such as banana pudding. "Perfected" recipes are provided by such well-known chefs and caterers as Paula Deen, Martha Giddens Nesbit, and Susan Mason.

Chapters are divided into cakes & tortes; cobblers, pies, & tarts; custards, puddings, & sauces; ice creams & sorbets; cheesecakes; and candies & cookies. Each inclusion was specifically chosen to offer up the taste of the Savannah lifestyle.

In Savannah, Georgia, that command is easy and fun to follow! Featuring more than forty recipes from famous restaurants, chefs, and caterers from the beautiful Southern city, this book serves as both a Savannah restaurant guide and a cookbook. Mouth-watering photographs--along with a bit of history about the city--accompany facts about the restaurants and their award-winning recipes.

From cakes, pies, and cobblers to candy, cookies, custards, and puddings, there are enough treats here to satisfy any sweet tooth. You will enjoy concocting all these glorious desserts. Savor Mrs. Wilkes's Banana Pudding, delight in Belford's Myers Rum Crï¿½me Brï¿½lï¿½e, and celebrate with Susan Mason's elegant Red Velvet Cake.

Whether you are a visitor or a longtime resident, Savannah Classic Desserts provides spectacular recipes for your enjoyment!

JANICE SHAY is a book packager producing illustrated books, children's books, and cookbooks. Savannah Classic Desserts, along with Charleston Classic Desserts, published simultaneously, is her first effort as an author.

A graphic designer of magazines and books for more than thirty years, Shay has won scores of national awards for her designs, and books that she produced have received the Jane Addams Peace Prize for Children's Literature, the Comstock Award, and the Oppenheim Toy Portfolio Gold award.

MARTHA GIDDENS NESBIT has been writing about food for more than thirty years. She has collaborated with The Lady & Sons owner and Food Network star, Paula Deen, on two cookbooks--The Lady and Friends and Paula Deen Celebrates! Nesbit also has written two cookbooks of her own and is a regular contributor to Savannah Magazine.

DEBORAH WHITLAW LLEWELLYN is a professional photographer in Atlanta, Georgia. She studied at the Alvin Ailey Dance Theatre in New York before becoming a freelance photographer. In addition to producing advertising and corporate photography, her work has been published in more than a dozen books and in more than one hundred articles for numerous regional and shelter magazines, including Atlanta Magazine, Coastal Living, Veranda, Traditional Home, and Elle Dï¿½cor.