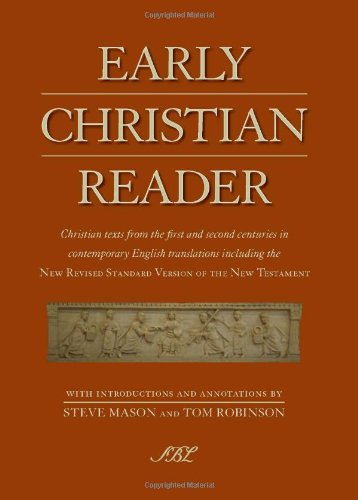 Early Christian Reader is a sourcebook and textbook that offers a welcoming and informed entrée into the complex world of the earliest Christian literature. The books of the New Testament (NRSV) are presented in a plausible chronological order rather than the canonical order encountered in modern New Testaments. In addition, translations of other early and important works such as the Gospel of Thomas, the Didache, the Letter of Barnabas, 1 Clement, and the letters of Ignatius are included. This volume orients its extensive introductions and notes to historical ways of thinking about these texts by examining each text as a product of its time and situation and by tracing similar themes from one text to the next. Each work s introduction discusses the date and place of composition, authorship, audience, basic themes, literary features, Jewish and Hellenistic contexts, and suggestions for further readings in the secondary literature. Generous notes illuminate specific historical, lexical, and interpretive issues. Broader issues affecting the treatment of these texts are introduced in seven lead articles covering such topics as ancient letter-writing, the relationships among the Gospels, meaning in texts, early church leadership structures, and the relationship between texts and events for example in Jesus life. Informative appendixes, maps, and charts make this an ideal text for the university or college classroom. Early Christianity remains a subject of great importance for anyone interested in the roots of Western civilization, and Early Christian Reader provides access to the formative texts from a perspective that simply seeks historical understanding.

Steve Mason is Professor and Kirby Laing Chair of New Testament Exegesis at the University of Aberdeen. He edits the multivolume Flavius Josephus: Translation and Commentary (Brill), and his most recent book, The Jewish-Roman War, 66 74: A Historical Inquiry, is in press with Cambridge University Press. Tom Robinson is Professor of Religious Studies at The University of Lethbridge. His works include Ignatius of Antioch and the Parting of the Ways: Early Jewish-Christian Relations (Baker Academic) and the co-authored Out of the Mouths of Babes: Girl Evangelists in the Flapper Era (Oxford University Press).