Items related to Whose Death is it Anyway? (Peaches Dann Mystery)

Whose Death is it Anyway? (Peaches Dann Mystery) 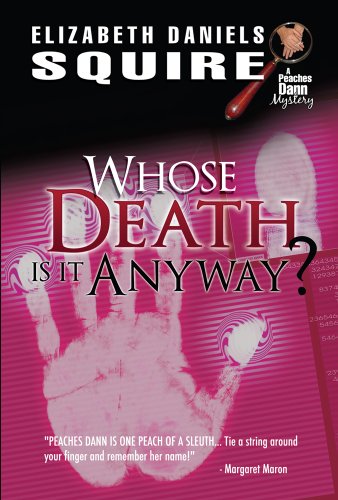 Absentminded detective Peaches Bann is attending a lively family reunion in the mountains of North Carolina when her cousin Fern stops conversation cold by announcing that several members of the clan have The Mark of Murder in their hands. Although Peaches knows it's only a mark that hand-readers call a sign of great originality, Fern's palm-reading proclivities make trouble anyway when a real murder rocks the family.

Elizabeth Daniels Squire died unexpectedly in February 2001 while returning from a book promotion tour to Alaska. A recipient of the prestigious Agatha award, in November 2006 she was the first mystery author ever inducted into the North Carolina Literary Hall of Fame. She lived with her husband on an organic farm in the mountains of western North Carolina. Due to a struggle with dyslexia, schoolwork-especially reading and writing-presented her with great difficulties early in life. Yet throughout her career, rather than hiding from her dyslexia, Elizabeth embraced it. Peaches Dann, the amateur detective who stars in most of her mysteries, suffers from an extraordinarily poor memory and is forced to find creative ways to overcome her forgetfulness in order to solve her perplexing cases. The mountains of western North Carolina serve as the backdrop for most of her works, and the diverse and often colorful people who live there were the inspiration for many of her characters. In her books, readers will discover among others a marijuana farmer, a genteel grandmother, the wife of a gun-crazy mountain man who runs a doll hospital, and a very talented dog. Because of the manner in which she describes the settings and characters in her novels, The Wall Street Journal once suggested readers take her books with them when vacationing in the south. Squire's husband, C.B. "Chick" Squire, said he chose Five Star Sleuths after interviewing several different publishers. "It was the personal attention I knew Five Star would give this project that made the difference," said Chick Squire, who edited The Liz Reader and Fortune in Your Hand.

1. WHOSE DEATH IS IT ANYWAY (Peaches Dann Mystery)

2. Whose Death is it Anyway? (Peaches Dann Mystery)