Saving Levi: Left to Die . . . Destined to Live (Focus on the Family) 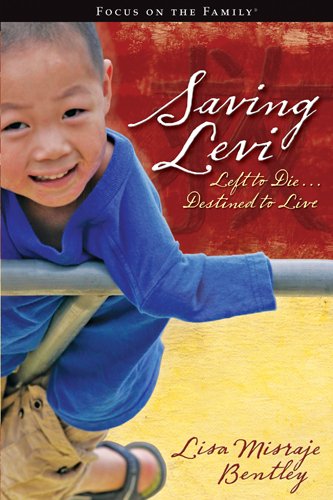 Lisa Misraje Bentley and her family went to China to build an orphanage in a village near Beijing. Soon after their arrival, a 6-week-old baby boy, with burns on over 70% of his body, was found in a field and brought to them. This is just the beginning of Levi's story. Saving Levi brings together the stories of believers and non-believers alike whom God used to save the life of this little boy and help him heal. Levi's story has already united people around the world through E-mail, prayer, and word of mouth. This is a book about the value of life and a loving God who uses whomever He pleases to accomplish His will.

"Covered with third- to fourth-degree burns over 70 percent of his body, the tiny baby boy shrieked in agony in a cold village field on the outskirts of Langfang, China.  Horrified villagers gathered around him, then walked away.  But one older man stayed behind, gathered the child in his arms and went for help.  His compassion and courage sparked a momentous chain of events;  The baby left to die would bring together people from different countries, faiths, and social backgrounds in the successful battle to save his life and secure his future."

Lisa Misraje Bentley is an author and speaker. She was born in Los Angeles to a Sephardic Jewish father and a Scandinavian Lutheran mother. Her parents' marriage didn't last long, and Lisa grew up trying to balance life between her mother's world in West Los Angeles and her father's world in the Hollywood Hills. Growing up, she would say that she was half Jewish and half Christian.
She lives outside Beijing, China, with her six children (two of whom are adopted from China), and their pets-a cowardly dog named Wilson and an albino frog, Gary.