Items related to The Long Dark Tea-Time of the Soul

Adams, Douglas The Long Dark Tea-Time of the Soul

The Long Dark Tea-Time of the Soul 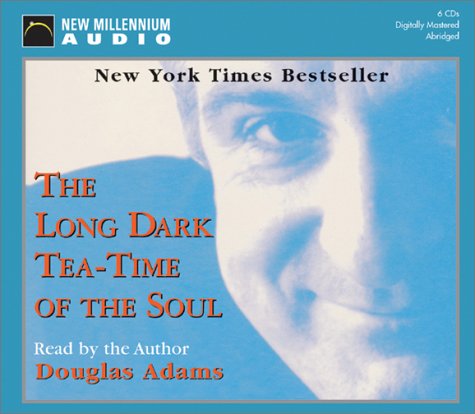 When a passenger check-in desk at Terminal Two, Heathrow Airport, shot up through the roof engulfed in a ball of orange flame the usual people tried to claim responsibility. First the IRA, then the PLO and the Gas Board. Even British Nuclear Fuels rushed out a statement to the effect that the situation was completely under control, that it was a one in a million chance, that there was hardly any radioactive leakage at all and that the site of the explosion would make a nice location for a day out with the kids and a picnic, before finally having to admit that it wasn't actually anything to do with them at all. No rational cause could be found for the explosion it was simply designated an act of God. But, think Dirk Gently, which God? And why? What God would be hanging around Terminal Two of Heathrow Airport trying to catch the 15:37 to Oslo? Funnier than Psycho...more chilling than Jeeves Takes Charge ...shorter than War and Peace...the new Dirk Gently novel, The Long Dark Tea-Time of the Soul.

Now, New Millennium Audio presents all the works of Douglas Adams on audiobook. The science-fiction trilogy, Hitchhiker's Guide to the Galaxy, and its four companions, all available, as well as The Salmon of Doubt.

Douglas Adams, a legend of imaginative fiction, ushered in the advent of comedic science fiction with The Hitchhiker’s Guide to the Galaxy. The book developed into a hugely successful series of five novels. The Dirk Gently series—Dirk Gently’s Holistic Detective Agency and The Long Dark Tea-time of the Soul—helped cement Adams as one of the most successful and beloved authors in science fiction.