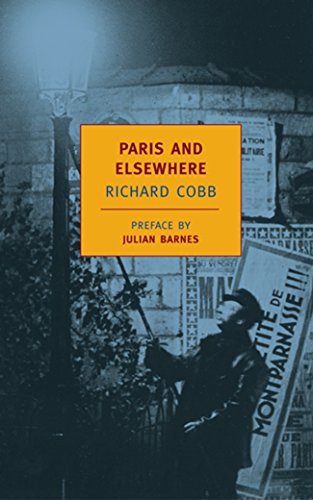 Perhaps no one loves France as much as the English--at least some of the English--and Richard Cobb, the incomparable Oxford historian of the French Revolution, was a passionate admirer of the country, a connoisseur of the low dive and the flophouse, as well as a longtime familiar of the quays of Paris and the docks of Le Havre and Marseille. Collecting memoirs, portraits of favorite haunts, appreciations of Simenon and Queneau, Rene Clair and Brassai, and including the famous polemic "The Assassination of Paris," Paris and Elsewhere shows us a France unglimpsed by tourists.

Richard Cobb (1917-1996) fell in love with France when he first visited in 1935. He went on to write many works of history—some in French, some in English—about the French Revolution and occupied France.

"Prophet of the past, poete maudit, Richard Cobb is a visionary. His books will take you on an extraordinary intellectual and emotional journey....Read them as you would Gogol: in search of dead souls."
— Robert Darnton, The New York Review of Books

"Cobb was a true historian of life 'from below', using archival evidence to bring alive the reality—and the suffering—of ordinary people’s existence. His essays about his own life and times have the same loving attention to detail, to the texture of quotidian events, to real people and real feeling."
— Geoffrey Wheatcroft, New Statesman

8. PARIS AND ELSEWHERE (NEW YORK RE