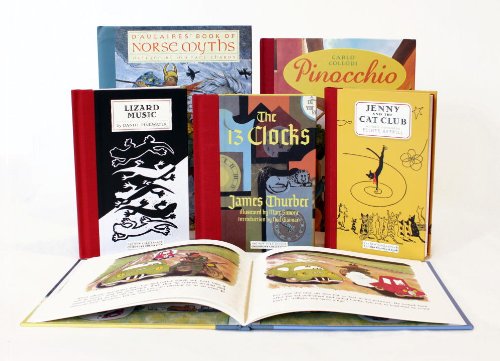 The NYRB Children's Collection includes beloved works of children's literature for ages 5-12, from delightful picture books for preschoolers throughto  favorite chapter books and novels for older children.   Praised for their elegant design and sturdy bindings, the books set a new standard for the definition of a "classic."

For the holidays, NYRB has put together a special gift set of 20 books. Included in the set:   Jenny and the Cat Club; D'Aulaires' Book of Norse Myths; James Thurber's The 13 Clocks, with an introduction by Neil Gaiman and illustrations by Marc Simont; Daniel Pinkwater's weird and wacky Lizard Music; and holiday favorites The Box of Delights by John Masefield and Something for Christmas by Palmer Brown.

The New York Review Children's Collection, which started as attempt to reward readers who have long wished for the return of their favorite children's titles, introduces these special books by highly regarded writers and illustrators to a new generation.

The covers feature a unified series design and all interior materials are carefully selected to reflect the period of original publication. These handsome hardcover editions have a cloth spine and many of them include original endpapers, line art, and full-color illustrations.

The New York Review Children's Collection Anniversary Set has one copy of each of these 20 books:

“...a handsome collection of reprints, published by The New York Review of Books, aimed at rescuing neglected children’s classics from ‘the dustbins of history.’” —USA Today

“...a mixture of classics and curiosities.” —The Horn Book Magazine

“Felicitations to the people in charge of picking and producing these. They will rest on kids’ shelves, I feel certain, for generations to come.” —Eric Alterman, “Altercations,” MSNBC.com

“Most people have a favorite book from their childhoods that has gone out of print. With that in mind, in 1999 the New York Review of Books began reissuing books that its employees and others remembered fondly.” —Publishers Weekly

“These books represent some of the finest children’s literature published during the last one hundred years. There are plenty of gems here for librarians to rediscover and pass onto a new generation of children.” —Philip Charles Crawford, Journal of the American Association of School Librarians