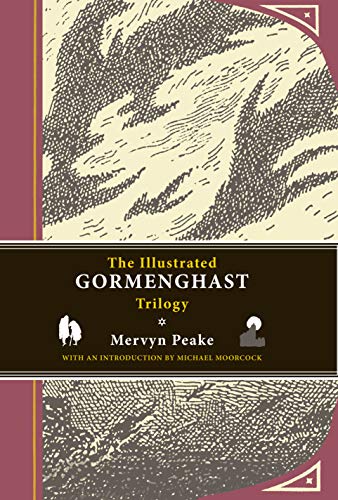 Titus is expected to rule this extraordinary kingdom and his eccentric and wayward subjects. But with the arrival of an ambitious kitchen boy, Steerpike, the established order is thrown into disarray. Over the course of these three novels―Titus Groan, Gormenghast, and Titus Alone― Titus must contend with a kingdom about to implode beneath the weight of centuries of intrigue, treachery, manipulation, and murder.Intoxicating, rich, and unique, The Gormenghast Trilogy is a tour de force that ranks as one of the twentieth century's most remarkable feats of imaginative writing. This special edition, published for the centenary of Mervyn Peake's birth, is accompanied by over one hundred of Peake's dazzling drawings.

Mervyn Peake's gothic masterpiece, the Gormenghast trilogy, begins with the superlative Titus Groan, a darkly humorous, stunningly complex tale of the first two years in the life of the heir to an ancient, rambling castle. The trilogy continues with the novels Gormenghast and Titus Alone, and all three books are bound together in this single-volume edition.

The Gormenghast royal family, the castle's decidedly eccentric staff, and the peasant artisans living around the dreary, crumbling structure make up the cast of characters in these engrossing stories. Peake's command of language and unique style set the tone and shape of an intricate, slow-moving world of ritual and stasis:

"The walls of the vast room which were streaming with calid moisture, were built with gray slabs of stone and were the personal concern of a company of eighteen men known as the 'Grey Scrubbers'.... On every day of the year from three hours before daybreak until about eleven o'clock, when the scaffolding and ladders became a hindrance to the cooks, the Grey Scrubbers fulfilled their hereditary calling."

Peake has been compared to Dickens, Tolkien, and Peacock, but the Gormenghast trilogy is truly unique. Unforgettable characters with names like Steerpike and Prunesquallor make their way through an architecturally stifling world, with lots of dark corners around to dampen any whimsy that might arise. This true classic is a feast of words unlike anything else in the world of fantasy. Those who explore Gormenghast castle will be richly rewarded. --Therese Littleton

Mervyn Peake (1911-1968) was a playwright, painter, poet, illustrator, short story writer, and designer of theatrical costumes, as well as a novelist. Among his many books are the celebrated Gormenghast novels, Titus Groan, Gormenghast, and Titus Alone, and the posthumously published Titus Awakes, the lost book of Gormenghast finished by Peake's wife Maeve Gilmore after his death. The Gormenghast novels, as well as Peake's other writings Mr. Pye and Peake's Progress, are all available from The Overlook Press.