Items related to The Lake of Darkness (Eaglesmount, 3)

The Lake of Darkness (Eaglesmount, 3) 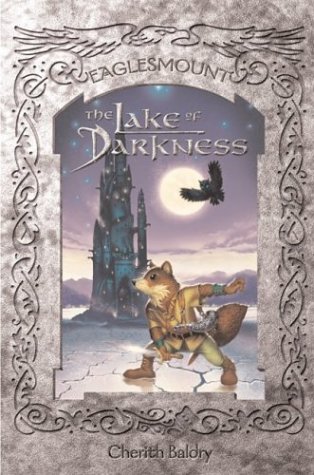 The animals of Riverbourne, led by the brave young pine martin, Vair, prepare to battle the Lord Owl but soon discover that a much greater evil lies in wait at Owlswater for the heir to the royal eagles. Simultaneous.

Cherith Baldry lives in Reigate. She used to be a teacher, but gave up teaching three years ago to write full time - and since then has written for many of the best-known series around. Fantasy is her favourite sort of fiction - and the Eaglesmount trilogy is her first work for Macmillan.

Grade 3-5–The third book in this "Redwall"-like series (Philomel) has half the detail, half the dialect, and maybe half the heart of those titles. Even the pen-and-ink illustrations seem familiar. A brave young pine marten named Vair leads a ragtag army of vixens, wildcats, squirrels, and other forest denizens against the evil Lord Owl, who has declared himself High King and heir to the eagles. Evidently in books one and two, Vair fulfilled several parts of a prophecy and he's really the High King, etc. Only he is acting weird because of a cursed dagger he removed from a would-be assassin, and he's turning against all of his friends and allies. There's plenty of action, a couple of good descriptions of meals, and a few touches of humor and emotion, but Baldry is no Brian Jacques. Buy this title if you have the first two books and a hungry audience of young animal-fantasy fans who aren't ready for Redwall.–Mara Alpert, Los Angeles Public Library
Copyright © Reed Business Information, a division of Reed Elsevier Inc. All rights reserved.

1. The Lake of Darkness (Eaglesmount Trilogy)

Book Description Mondo Publishing, 2004. Condition: Good. Shows some signs of wear, and may have some markings on the inside. Seller Inventory # GRP102177866

2. The Lake of Darkness (Eaglesmount Trilogy)

Book Description Mondo Publishing, 2004. Condition: Good. Former Library book. Shows some signs of wear, and may have some markings on the inside. Seller Inventory # GRP9552591

3. The Lake of Darkness (Eaglesmount, 3)

4. The Lake of Darkness (Eaglesmount, 3)