Items related to The Life Beyond 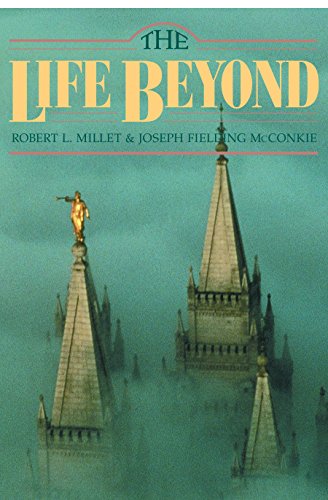 For ages poets and philosophers have tried to explain death, to give comfort, to soften despair. The Life Beyond shows how the Restoration changed despair to understanding, opening our eyes to the majesty of the plan of salvation. Included in the book are insights into the three degrees of glory, the spirit world, missionary work here and hereafter, and temple work. The authors also explore questions all of us have pondered: What do spirits know? What is the purpose of ministering angels? How will those of less than normal mental powers be judged? Here is clear evidence of our eternal nature and our glorious potential in that life beyond mortality.

Robert L. Millet was born and reared in Baton Rouge, Louisiana, and served as a missionary in the Easter Sates Mission. Before joining the Church Educational System he worked with LDS Social Services in Idaho for two years. He received both the B.S. and M.S. degrees in Psychology from Brigham Young University and a Ph.D. from Florida State University in Biblical Studies and Nineteenth and Twentieth Century Religious Thought.

A prolific speaker and writer, his most recent books include Lost and Found, More Holiness Give Me, Alive in Christ, Life After Death, When a Child Wanders, and Within Reach. He previously co-edited The Joseph Smith Translation for Brigham Young University’s Religious Studies Center and the Studies in Scripture series. He and his wife Shauna reside in Orem, Utah and are the parents of six children.

Joseph Fielding McConkie was born and reared in Salt Lake City. A former missionary to Scotland, he also served as an LDS chaplain for three years, one of which was spent in Vietnam. He graduated from Brigham Young University, where he also received a master’s degree in Church History and a doctorate in Educational Administration. His previously authored works include Gospel Symbolism, Seeking the Spirit, and The Spirit of Revelation. He and his wife, Brenda, live in Orem, Utah are the parents of nine children.