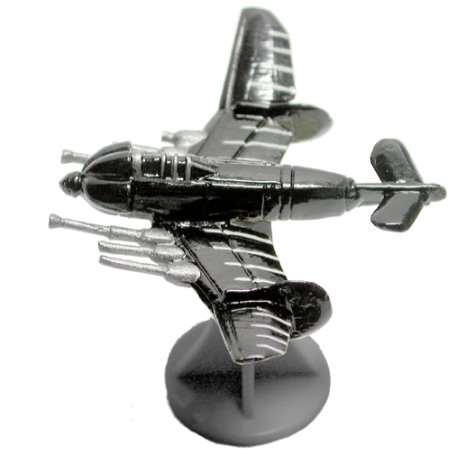 The Black Swans are one of the most successful and dangerous raider groups in the skies. Formed in 1934, this ruthless squad was recruited by the enigmatic Black Swan herself. Composed of highly skilled combatants, the Swans do their best to direct their machine gun fire toward legitimate targets, avoiding collateral damage. The Black Swans currently fly in and around the Empire State area. Crimson Skies is an action-packed collectible miniatures game of dogfighting and barroom-brawling in an aviation-dominated world. Every plastic figure comes prepainted and fully assembled. The Crimson Skies collectable miniatures game has no cumbersome rulebooks or complex record-keeping - all the game information needed to play each figure is on its unique patent-pending combat dial. Rules sold separately. Contents: Four prepainted, fully assembled planes on combat-dial bases.