Items related to The Absolutist 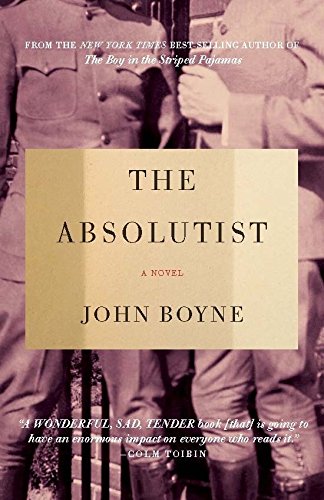 “A novel of immeasurable sadness, in a league with Graham Greene’s The End of the Affair. John Boyne is very, very good at portraying the destructive power of a painfully kept secret.”
—John Irving

A masterfully told tale of passion, jealousy, heroism and betrayal set in the gruesome trenches of World War I.

It is September 1919: twenty-one-year-old Tristan Sadler takes a train from London to Norwich to deliver a package of letters to the sister of Will Bancroft, the man he fought alongside during the Great War.

But the letters are not the real reason for Tristan's visit. He can no longer keep a secret and has finally found the courage to unburden himself of it. As Tristan recounts the horrific details of what to him became a senseless war, he also speaks of his friendship with Will--from their first meeting on the training grounds at Aldershot to their farewell in the trenches of northern France. The intensity of their bond brought Tristan happiness and self-discovery as well as confusion and unbearable pain.

The Absolutist is a masterful tale of passion, jealousy, heroism, and betrayal set in one of the most gruesome trenches of France during World War I. This novel will keep readers on the edge of their seats until its most extraordinary and unexpected conclusion, and will stay with them long after they've turned the last page.

Amazon Best Books of the Month, July 2012: Disowned by his family due to an ill-advised kiss, Tristan Sadler enlists in the English army, hoping to prove himself on the battlefield but instead finding an unlikely lover. What begins as a slow-building World War I period piece (“Steady on, old chap”) grows deeper, more curious, and uneasy as it progresses--and midway through this sad and beautiful story, you realize you’re in the hands of a quiet master. Piling questions atop half-truths, John Boyne (The Boy in the Striped Pajamas) has crafted a taut and tragic tale of love and war, with a kick-in-the-gut ending. The scenes in the trenches--“beneath the ground like cadavers"--are horrifying. So is the macho intolerance and fear of anyone who dares question the moral imperative of the terrible war, the alleged cowards and so-called “feather men.” --Neal Thompson

I became an admirer of John Boyne’s writing with his first novel, The Thief of Time.

His latest, The Absolutist, is a novel of immeasurable sadness, in a league with Graham Greene's The End of the Affair and a no less masterful handling of the first-person narrative voice than Michael Ondaatje's The Cat's Table.

Boyne is very, very good at portraying the destructive power of a painfully kept secret —not to mention the damage done by the self-recriminations (and other condemnations) that are released when that secret is revealed.

The Absolutist is one of those great stories that is not what it first seems, though what the story appears to be is a powerful enough premise to begin any novel: a young soldier, returning from World War One, is traveling from London to Norwich to deliver some letters to the grieving sister of a fallen comrade.

We presume that the worst of what has happened is what we already know or have imagined of those trenches in northern France. (Boyne is also very, very good at historical fiction; The Absolutist begins in September 1919.) But the young soldier, who is twenty-one, has something to confess; this is a forbidden love story, a gay love story, but one with a terrible twist.

John Boyne was born in Dublin, Ireland in 1971. He is the author of nine novels (seven for adults and two for children), including The Boy in the Striped Pajamas, which was made into an award-winning film. The novel also won two Irish Book Awards, was short-listed for the British Book Award, reached the top of the New York Times Best Sellers list, and has sold more than five million copies. His novels are published in forty-five languages. He lives in Dublin. Please visit him at www.johnboyne.com

3. The Absolutist: A Novel by the Author of The Heart's Invisible Furies

6. The Absolutist: A Novel by the Author of The Heart's Invisible Furies

7. The Absolutist (Paperback or Softback)

9. The Absolutist: A Novel by the Author of The Heart's Invisible Furies