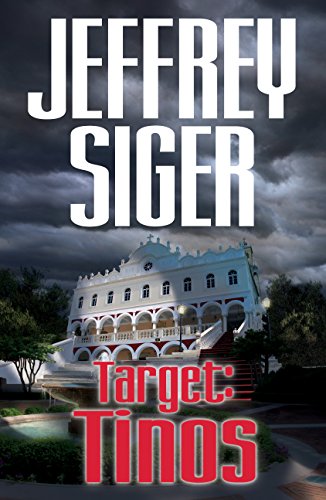 "Target: Tinos [is] another of Jeffrey Siger's thoughtful police procedurals set in picturesque but not untroubled Greek locales."―New York Times

In an isolated olive grove on the Aegean island of Tinos lies the remains of two charred bodies chained together amid pieces of an incinerated Greek flag. An enraged press screams out for justice for the unknown victims, until the dead are identified as Gypsies. Then the story simply dies. Is it a Gypsy clan war, a hate crime, or something else? With no one seeming to care, the Greek government has no interest in resurrecting unwanted media attention and orders the investigation closed. But Andreas Kaldis, head of Greece's special crimes division, has other plans. He presses on to unravel a mystery that yields more dead, a modern secret society, and questions about the sudden influx of non-Greeks and Gypsies to Tinos. Now Andreas must find the killers before more die, stop the robbery of the century, and get married in the process.

Jeffrey Siger was born and raised in Pittsburgh, Pennsylvania, practiced law at a major Wall Street law firm, and later established his own New York City law firm where he continued as one of its name partners until giving it all up to write full-time among the people, life, and politics of his beloved Mykonos. The Mykonos Mob is the tenth novel in his internationally best-selling and award nominated Chief Inspector Andreas Kaldis series, following up on An Aegean April, Santorini Caesars, Devil in Delphi, Sons of Sparta, Mykonos After Midnight, Target: Tinos, Prey on Patmos, Assassins of Athens, and Murder in Mykonos.

The New York Times described Jeffrey Siger's novels as "thoughtful police procedurals set in picturesque but not untroubled Greek locales," and named him as Greece's thriller writer of record. The Greek Press called his work "prophetic," Eurocrime described him as a "very gifted American author...on a par with other American authors such as Joseph Wambaugh or Ed McBain," and the City of San Francisco awarded him its Certificate of Honor citing that his "acclaimed books have not only explored modern Greek society and its ancient roots but have inspired political change in Greece." He now lives in Greece.

"Thrilling, thought-provoking, and impossible to put down." (Tim Hallinan, award-winning author of the Poke Rafferty thrillers)