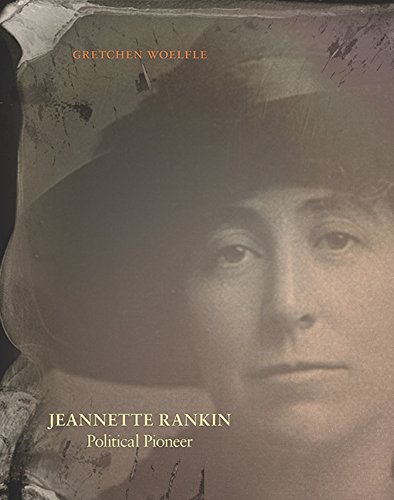 A fascinating biography of Jeannette Rankin, the first woman elected to the U.S. Congress. Born on the Montana frontier in 1880, Rankin lived long enough to speak her mind on television in the 1970s. As a child, she learned early how to take charge. She spoke up in the 1910s to persuade men to give women the vote. In 1916 she was elected to Congress. She said yes to peace when most people wanted war. She said yes to social justice for workers, families, and children when most lawmakers said no. When she left Congress in 1943, people forgot about her, but she continued to work for what she believed. "Rediscovered" in the 1960s, Rankin became a role model for feminists and Vietnam peace activists. Photographs, newspaper clippings, campaign materials, and even hate mail tell the story of a remarkable woman in this captivating Booklist Top Ten Biographies for Youth book.

Gretchen Woelfle is an award-winning author. Her first book, The Wind at Work: An Activity Guide to Windmills, led to her second book, Katje the Windmill Cat, followed by Animal Families, Animals Friends. Her stories and essays haved appeared in Cricket,Spider, and Cicada magazines and in the anthology series Stories from Where We Live (Milkweed Edition). She lives in Los Angeles.

*Starred Review* By any measure, Jeannette Rankin was a woman ahead of her time. She was Montana's representative in Congress before women in other states even had the right to vote. Woelfle does a terrific job introducing Rankin, beginning an attention-grabbing story in which an elderly Rankin, a lifelong pacifist, leads an antiwar protest during the 1970s. Woelfle then moves back in time, restarting the story with an anecdote about young Jeannette sewing up an injured horse on her father's ranch. Readers' interest level will stay high throughout as Rankin finds satisfaction in working as a social worker and then discovers her calling as a crusader for women's rights. Even during her two short tenures in Congress, Rankin never abandoned her core beliefs; she voted against both World War I and II declarations of war (in the case of the latter, standing alone). The high standard of writing is matched by the book's format. Informative sidebars are well integrated, and from the intense portrait on the cover to the well-chosen photos and historical material, the volume offers interesting things to look at on every page. A time line, a bibliography, and source notes bolster this robust introduction to a fascinating figure. Send younger readers to Trish Marx's Jeannette Rankin: First Lady of Congress (2006). Ilene Cooper
Copyright © American Library Association. All rights reserved