Items related to Karl Jaspers on Philosophy of History and History of...

Karl Jaspers on Philosophy of History and History of Philosophy

Karl Jaspers on Philosophy of History and History of Philosophy 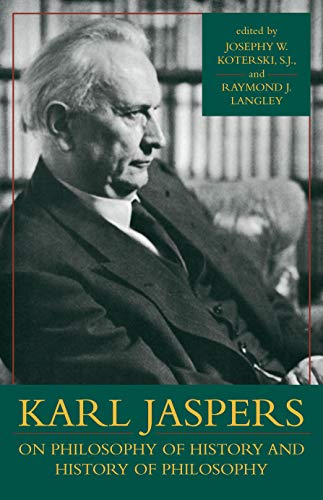 This volume contains the first English translations of texts by Karl Jaspers on Aquinas, Kant, Hegel, and Kierkegaard. In addition, interpretive and critical essays by renowned scholars assess Jaspers' contributions to the history of philosophy and the philosophy of history.

Coming to philosophy from psychiatry, Jaspers was an inspired reader of the human psyche. He uniquely categorized great philosophers as paradigmatic individuals, whose singular humanity forced itself into historical consciousness and inspired world religions and philosophies. In this special category he placed Socrates, Buddha, Confucius, and Jesus. Among the giants of systematic philosophical thinking he grouped Plato, Augustine, and Kant as the great founders of Western thought. Separate essays in this volume deal with his treatment of each of these figures.

To the philosophy of history Jaspers contributed the provocative idea of an "axial age." This singular era, extending from 800 B.C.E. to 200 C.E. witnessed the simultaneous but independent unfolding of virtually all the major religious, philosophical, and cultural traditions. Several essays illuminate his understanding of the "axial age."

This stimulating collection of new translations and in-depth essays by noted experts on one of the 20th century's great minds will complement college and university libraries and be of value to anyone interested in comparative Eastern and Western philosophy, the history of ideas, or the interrelations of biography and history.

1. Karl Jaspers on Philosophy of History and History of Philosophy