Items related to The Lysenko Effect: The Politics of Science

Roll-Hansen, Nils The Lysenko Effect: The Politics of Science

The Lysenko Effect: The Politics of Science 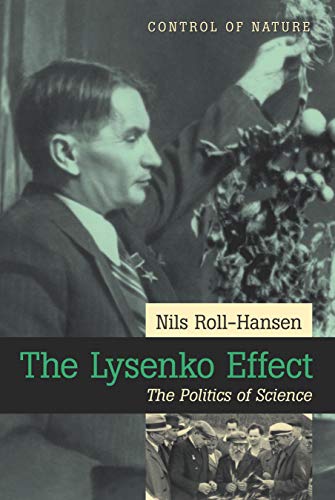 Ukrainian agronomist T. D. Lysenko (1898-1976) was the leader of an influential Soviet agrobiological school that rejected standard genetics and instead promoted a brand of pseudoscience that held sway among Soviet biologists for over twenty-five years. The dominance of Lysenko's pseudoscientific ideas has been characterized as the biggest scandal of 20th-century science. That it happened under a regime that took particular pride in building its policy on science makes the affair particularly interesting, even for Western observers free from totalitarian governments. The Soviet Union was the first country with a government policy and large-scale public support for science. Agricultural science was a main showcase for this unprecedented investment in science.In this in-depth study of Lysenkoism, historian of science Nils Roll-Hansen seeks to understand how Soviet biology went so wrong. Unlike other scholars who have studied Lysenko's influence, Roll-Hansen argues that the corruption of Soviet biology should not be explained primarily as the result of Stalin's despotism and the willful intervention of party hacks into the objective methods of science. Because of ideological and economic pressures to produce tangible benefits to society, says Roll-Hansen, Soviet biology, under Lysenko's leadership, succumbed to a wishful-thinking syndrome, which paved the way for Lysenko. By such thinking scientific objectivity was compromised in favor of ideas that accorded with progressive political ideals and economic goals as determined by the ruling politburo. Roll-Hansen draws provocative parallels between Lysenko's bad science in mid-20th-century Russia and attempts by Western theorists today to construe science in social constructivist terms or to exercise political control over scientific research.Based on archival materials not previously accessible, The Lysenko Effect is both a valuable contribution to the history of science and an instructive case study in the ways in which ideals of social progress can skew the results of objective science in any society.

Nils Roll-Hansen (Oslo, Norway) is professor of history and philosophy of science at the University of Oslo, the author of The Freedom and Necessity of Science: Pasteur’s Theories in Growth and Decline and the editor (with Gunnar Broberg) of Eugenics and the Welfare State.

1. The Lysenko Effect: The Politics of Science Roll-Hansen, Nils