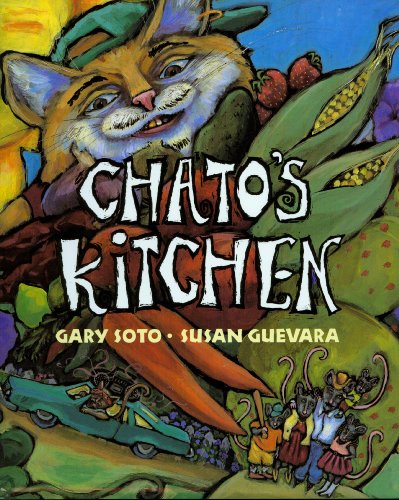 Chato can't believe his luck. Not only is he the coolest low-riding cat in East L.A., but his brand-new neighbors are the plumpest, juciest, tastiest-looking family of mice to move into the barrio in a long time. So Chato and his best friend, Novio Boy, get out the pots and pans, the tortillas and the beans--everything you'd need for a welcoming feast, except for the main dish, and the guests of honor. Of course, in Chato's mind they are one and the same thing.

But the mice are bringing a surprise guest of their own, who may be more than a cool cat can swallow.

"Chato, a low-riding cat with six stripes, was slinking toward a sparrow when he heard the scrape of tiny feet coming from the yard next door." You get the idea. Chato is a sly, mustachioed "cool cat" from an East Los Angeles barrio. The tiny feet? Those belong to the new mice (ratoncitos) next door--"five mice the color of gray river rock," to be precise. Chato promptly invites them over for dinner, in exactly the sense you might fear.

"That Chato cat seems muy simpatico, very nice, I'm sure," says Papi mouse. The mice (being cheese lovers) spend the day making quesadillas for the fiesta, while Chato and his best friend Novio Boy busily prepare side dishes for a meal con ratoncitos. Instead of the anticipated gruesome ending, a surprise twist is in the works.

Gary Soto, author of Too Many Tamales, is brilliantly witty, and Chato's Kitchen--an ALA Notable Book and a Parents' Choice Award Winner--is truly marvilloso. Susan Guevera's comical, deliciously detailed, richly colored depictions of the creatures are priceless as well, earning her the 1996 Pura Belpre Award for Illustration. A culinary concoction that no youngster (or adult) will be able to resist. (Ages 4 to 8)

Born in Fresno, California to Mexican American parents, Gary Soto learned the hard work ethic through his share of chores, including mowing lawns, picking grapes, painting house numbers on street curbs, and washing cars. His hard work paid off at California State University at Fresno, from which he graduated with an English degree, and later at the University of California at Irvine, where he earned a Masters of Fine Arts in Creative Writing.

Gary Soto is an acclaimed poet, essayist, and fiction writer. The awards for this multi-talented author are many, ranging from the U.S. Award for International Poetry Forum in 1977 for his first published book of poetry, The Elements of San Joaquin, to a Before Columbus Foundation American Book Award in 1985 for Living Up the Street, his first published work of prose recollections. His short story collection Baseball in April, was named an American Library Association's Best Book for Young Adults, and he received the Bura Belpre Award for Chato's Kitchen. IHe has also received the Andrew Carnegie Medal for Excellence in Children's Video for Pool Party, and was nominated for a National Book Award.

His other credits include fellowships from the Guggenheim Foundation, the National Endowment for the Arts, and the California Arts Council. Gary Soto is also one of the youngest poets to appear in the Norton Anthology of Modern Poetry. Several of his books have been translated into French, Spanish and Italian.