Items related to NAVCIVGuide: A Handbook for Civilians in the United... 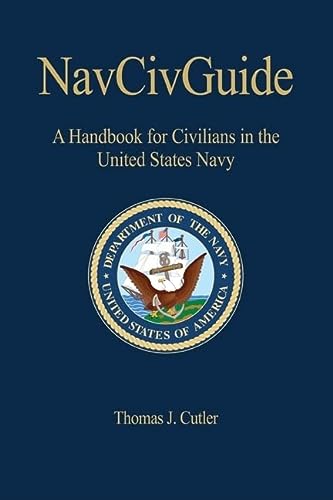 The success of the U.S. Navy in its more than two centuries of existence is due not only to the essential contributions of Sailors on active duty and in the reserve, but to the civilians who have worked as part of the Navy since its earliest days. But active and reserve Sailors go to boot camp or officer candidate school to prepare them for their new (unique) occupation. And the Navy has long provided The Bluejacket's Manual to incoming Sailors to serve as an introduction and as a continuing reference so that they will feel more comfortable in a new and otherwise alien world, where floors suddenly become decks, where 1337 is a time in the here-and-now instead of a date from ancient history, and where uniforms are anything but! While it is impractical to send all civilian workers to a centralized indoctrination course, it is possible to provide a common reference, specially designed to acquaint civilians with this very special world they have entered. This book is that common reference guide designed specifically for those civilians, who like the Sailors in the Fleet, serve the nation and the Navy, and who need help in understanding where they are and what it is all about. All organizations and occupations have their own idiosyncrasies, and a big step toward "fitting in" has always been learning how to "talk the talk and walk the walk." Like The Bluejacket's Manual, this guide provides the words and steps needed to serve as an introduction for new employees and as a ready reference for veteran workers.

Thomas J. Cutler is a retired lieutenant commander and former gunner's mate second class who served in patrol craft, cruisers, destroyers, and aircraft carriers. His varied assignments included an in-country Vietnam tour, small craft command, and nine years at the U.S. Naval Academy, where he served as Executive Assistant to the Chairman of the Seamanship & Navigation Department and Associate Chairman of the History Department. While at the Academy, he was awarded the William P. Clements Award for Excellence in Education (military teacher of the year).

He is the founder and former Director of the Walbrook Maritime Academy in Baltimore. Currently he is Fleet Professor of Strategy and Policy with the Naval War College and is the Director of Professional Publishing at the U.S. Naval Institute.

Winner of the Alfred Thayer Mahan Award for Naval Literature, the U.S. Naval Institute Press Author of the Year, and the U.S. Maritime Literature Award, his published works include NavCivGuide: A Handbook for Civilians in the U.S. Navy; A Sailor's History of the U.S. Navy [one of the books in the Chief of Naval Operations Reading Program]; The Battle of Leyte Gulf; Brown Water, Black Berets: Coastal & Riverine Warfare in Vietnam; and the 22nd, 23rd (Centennial), and 24th editions of The Bluejacket's Manual. His other works include revisions of Jack Sweetman's The Illustrated History of the U.S. Naval Academy and Dutton's Nautical Navigation. He and his wife, Deborah W. Cutler, are the co-editors of the Dictionary of Naval Terms and the Dictionary of Naval Abbreviations.

His books have been published in various forms, including paperback and audio, and have appeared as main and alternate selections of the History Book Club, Military Book Club, and Book of the Month Club. He has served as a panelist, commentator, and keynote speaker on military and writing topics at many events and for various organizations, including the Naval History and Heritage Command, Smithsonian Institution, the Navy Memorial, U.S. Naval Academy, MacArthur Memorial Foundation, Johns Hopkins University, U.S. Naval Institute, Armed Forces Electronics Communications and Electronics Association, Naval War College, Civitan, and many veterans' organizations. His television appearances include the History Channel's Biography series, A&E's Our Century, Fox News Channel's The O'Reilly Factor, and CBS's 48 Hours.

5. NAVCIVGUIDE: A HANDBOOK FOR CIVI