Items related to And I Was There: Pearl Harbor and Midway -- Breaking...

Layton, Edwin T.; Pineau, Roger; Costello, John And I Was There: Pearl Harbor and Midway -- Breaking the Secrets (Bluejacket Books) 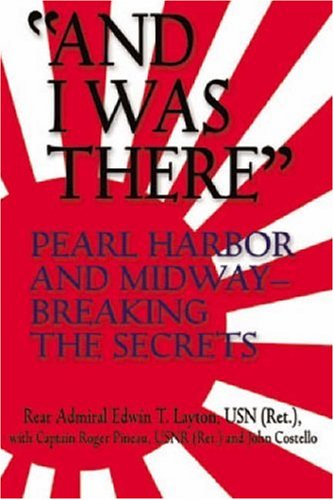 At Pearl Harbor when the Japanese attacked, Ed Layton knew exactly what had gone wrong as he watched the bombs and torpedoes wipe out the U.S. Pacific Fleet. But he kept those secrets to himself for forty-three years—until the government released half a million classified documents from its intelligence archives. Finally free to tell his story, the retired admiral published his revelations in this memoir in 1985 to worldwide attention. It is the first book by a top-ranking American naval officer to describe how Japan had managed to inflict such damage. Layton names those who knew about the Japanese intentions, how they acquired their knowledge, and how they misused it. He speaks with unique authority. An intelligence officer, he was responsible for keeping Admiral Nimitz informed about Japan’s strategic objectives, capabilities, and intended operations.

This blow-by-blow account of a war within a war describes admirals fighting admirals while civilian officials in Washington vied for power and turf and disregarded the national interest. It tells of a secret deal between Roosevelt and Churchill that called for preemptive air raids on the Japanese homeland and how this deterrent strategy failed. It is also the first book to detail the background of the secret radio intelligence war against Japan and to break the story of how Washington repeated its blunders of Pearl Harbor and almost lost the crucial Battle of Midway. Calling the shots as he saw them, Layton writes in salty, unvarnished prose but thoroughly documents his revelations.

Rear Adm. Edwin T. Layton, USN (Ret.), was the staff intelligence officer for the Commander in Chief of the U.S. Pacific Fleet from 7 December 1940 to the surrender of Japan.

According to Admiral Layton, the Japanese succeeded at Pearl Harbor because of audacious planning plus a dramatic breakdown in our intelligence service. This failure was caused by feuding among high-level officers for control of the intelligence and radio intercept divisions. Six months after Pearl Harbor, self-serving petty jealousy at naval headquarters almost caused us to lose the decisive battle of Midway. Layton reveals the full details of this deplorable situation and vigorously defends Admiral H.E. Kimmel, naval commander at Pearl Harbor, who was blamed for the disasters. Layton accuses instead some high-ranking naval officers in Washington who failed to pass along the latest intelligence intercepts. There is much new information here. Primarily for specialists with some knowledge of cryptography and intelligence operations, this is essential for comprehensive World War II collections. Stanley Itkin, Hillside P.L., New Hyde Park, N.Y.
Copyright 1986 Reed Business Information, Inc.