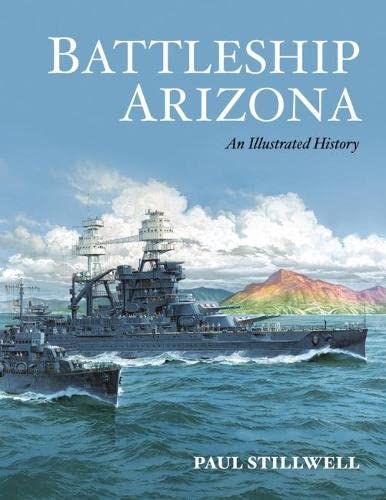 The tragic sight of the USS Arizona burning after the attack on Pearl Harbor is etched in the collective memory of the United States citizens that lived through that infamous day. The ship sustained more losses in one day than any other ship in the U.S. Navy's history--1,177 men. Now available in paperback, Battleship Arizona describes in detail the battleship's twenty-five-year career, including the attack at Pearl Harbor, via the riveting stories of her survivors. Paul Stillwell draws on nearly one hundred interviews of former crewmen and countless official documents to present a full history of the famous warship.

Paul Stillwell is an independent historian and retired naval officer. He worked for thirty years at the U.S. Naval Institute as an oral historian and editor of Naval History magazine. He is the author or editor of a dozen books, including four on battleships and an award-winning volume on the Navy's first African American officers, The Golden Thirteen.

This study of Pearl Harbor's most famous casualty is less a biography of a warship than a sympathetic profile of the crew and their activities. Military hardware buffs may be disappointed with the lack of nuts-and-bolts technical detail about hull and weapon systems, but the story of the ship's career is presented in profusely illustrated detail. Stillwell conducted numerous interviews with Arizona veterans and ends up with a captivating group portrait of officers and enlisted men. He also provides highly readable insight into the swagger and professionalism that made up the once-invincible "Battleship Navy." Previewed in "The Day of Infamy in Print," LJ 9/1/91, p. 206-207.
- Raymond L. Puffer, U.S. Air Force His tory Prog., Los Angeles
Copyright 1991 Reed Business Information, Inc.

Book Description Naval Institute Press, United States, 2016. Paperback. Condition: New. Illustrated, Reprint. Language: English. Brand new Book. The tragic sight of the Arizona burning after the attack on Pearl Harbor is etched in our national memory. She sustained more losses that day than any other ship in the U.S. Navy's history-1,177 men. Now available in paperback, Battleship Arizona recounts the attack through the riveting stories of her survivors as part of describing in detail the battleship's twenty-five-year career.Paul Stillwell draws on nearly 100 interviews of former crewmen and countless official documents to present a full history of the famous warship, from her keel-laying in 1914 onward. While he does not neglect the ship's technical details, he focuses on the human aspects of the story, particularly the experiences of the enlisted personnel. Their recollections offer an important perspective of life on the Arizona, a way of life shared by all battleship sailors. Always insightful, often amusing, their stories give the reader a complete and honest picture of the U.S. Navy and its men during the 1920s and 1930s.Hundreds of photographs and several drawings showing the Arizona in various configurations add an important visual dimension to the book. Extensive appendixes fill in the details. One offers a complete chronology of the Arizona's activities. Another includes the ship's technical data. Others list commanding officers and members of the crew at the time of the air raid, indicating who was killed and who survived. Yet another offers a series of touching letters written by an Arizona sailor who went down with his ship. Seller Inventory # AAN9781591146780