Items related to Destroyer Captain: Lessons of a First Command 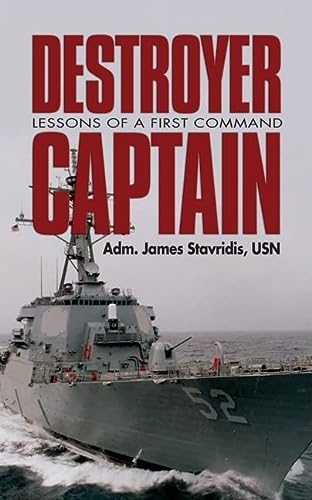 This memoir of James Stavridis' two years in command of the destroyer USS Barry reveals the human side of what it is like to be in charge of a warship--for the first time and in the midst of international crisis. From Haiti to the Balkans to the Arabian Gulf<, the Barry was involved in operations throughout the world during his 1993-1995 tour. Drawing on daily journals he kept for the entire period, the author reveals the complex nature of those deployments in a "real time" context and describes life on board the Barry and liberty ashore for sailors and officers alike.\\ With all the joy, doubt, self-examination, hope, and fear of a first command, he offers an honest examination of his experience from the bridge to help readers grasp the true nature of command at sea. The window he provides into the personal lives of the crew illuminates not only their hard work in a ship that spent more than 70 percent of its time underway, but also the sacrifices of their families ashore. Stavridis credits his able crew for the many awards the Barry won while he was captain, including the Battenberg Cup for top ship in the Atlantic Fleet. Naval aficionados who like seagoing fiction will be attracted to the book, as will those fascinated by life at sea. Officers from all the services, especially surface warfare naval officers aspiring to command, will find these lessons of a first command by one of the Navy's most respected admirals both entertaining and instructive.

Adm. James Stavridis, USN (Ret.) is a 1976 distinguished graduate of the U.S. Naval Academy who spent over 35 years on active service in the Navy. He commanded destroyers and a carrier strike group in combat and served for seven years as a four-star admiral, including nearly four years as the first Navy officer chosen as Supreme Allied Commander for Global Operations at NATO. After retiring from the Navy he was named the dean of The Fletcher School of Law and Diplomacy at Tufts University in 2013. In addition, he currently serves as the U.S. Naval Institute's Chair of the Board of Directors. He has written articles on global security issues for The New York Times, The Washington Post, Atlantic Magazine, Naval War College Review, and Proceedings and is the author or co-author of several books, including Command at Sea 6th Ed. and Destroyer Captain.

"The window into the thoughts and feelings of one of the Navy's most successful officers of the era makes this a captivating read and is one of the most valuable aspects of the book. Every military officer and member of the joint and interagency warfighting team will gain precious insight into what it is really like commanding a U.S. Navy ship and leading sailors." -- Joint Force Quarterly

"Designed to be a good read for anyone fascinated with what life is like behind the doors of the captain's cabin. Fortunately, Stavridis is a writer who is not only good with the small details of daily life but shares a sense of history and awe of the sea. Simply, he is in love with command at sea, and you feel it throughout the entire book." -- Naval War College Review

"Destroyer Captain is a quick and enjoyable read. The writing flows like a good conversation with an old friend. This occurs in part because the chapters are short and succinct, enabling the reader to zip through the prose. Particularly valuable are transcripts of Stavridis' speeches to his crew on Memorial Day and during the Change of Command at the end of his tour...It is recommended for anyone who is interested in or has fond memories of naval service." -- Naval Historical Foundation

"With all the joy, doubt, self-examination, hope, and fear of a first command, Stavridis offers an honest assessment of his experiences from the bridge to help readers grasp the true nature of command at sea. Officers from all the services, especially surface warfare naval officers aspiring to command, will find these lessons of a first command by one of the Navy's most respected admirals both entertaining and instructive."-- Sea Classics

"Ought to be read by those aspiring to leadership positions at sea (and land) from lead petty officers to future skippers." -- Great Lakes Bulletin