Items related to Believed to be Alive (BLUEJACKET BOOKS)

Believed to be Alive (BLUEJACKET BOOKS) 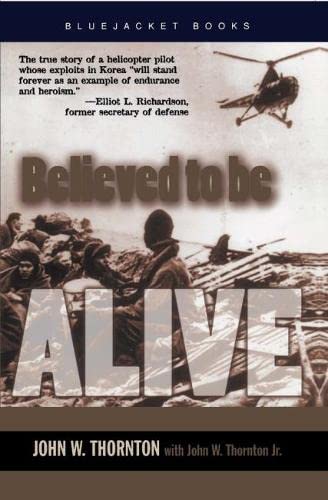 On March 31, 1951, a young Navy helicopter pilot, Lt.(jg) John W. Thornton volunteered for a dangerous mission to rescue a key intelligence unit trapped on a high ridge behind enemy lines in Korea. Although he wrecked his craft while attempting to land on a small clearing atop the ridge, he immediately directed other helicopters to the scene to evacuate the marooned personnel. Thornton's resourcefulness was credited with saving the lives of three men who possessed vital intelligence, and his courage and selfless devotion to duty--he gallantly refused to be rescued himself despite rapidly advancing hostile forces--won him the Navy Cross.

This firsthand account of his exploits that day and during the following three years he spent in captivity tell a tale of courage, cruelty, and compassion. His descriptions of combat are blood chilling, and his account of brainwashing is revealing and not without humor. With a foreword by Edwin P. Hoyt and first published in 1981, the book has earned high praise and brought Thornton's experiences to the attention of many Americans. Now back in print after 23 years, it promises to attract new generations wanting to know more about the Korean war and its often overlooked heroes.

John W. Thornton, a retired captain in the U.S. Navy who died in January 2004, was the first Navy helicopter pilot to be shot down and taken prisoner in the history of aviation. In addition to the Navy Cross, he earned nearly thirty other medals and citations.

1. Believed To Be Alive

Book Description Naval Inst Pr, Annapolis, Maryland, U.S.A., 2004. Soft cover. Condition: New. NEW Book, perfect condition, cover/text completely pristine. No physical flaws, small remainder mark. FREE TRACKING within the US, and email notice when shipped. Normally, books are shipped twice a day, with afternoon USPS pickup, or next morning drop-off at the Post Office. We package on Sunday for shipment first thing Monday morning. Your satisfaction guaranteed. We have multiple copies of most books. Email inquiries are welcomed. Thanks for reading all of our boilerplate. Seller Inventory # 010755

2. Believed to Be Alive (BLUEJACKET BOOKS)

3. Believed to Be Alive (Bluejacket Books)

4. Believed to Be Alive (BLUEJACKET BOOKS)