Items related to We Shall Fight on the Beaches: Defying Napoleon and...

Lavery, Brian We Shall Fight on the Beaches: Defying Napoleon and Hitler, 1805 and 1940 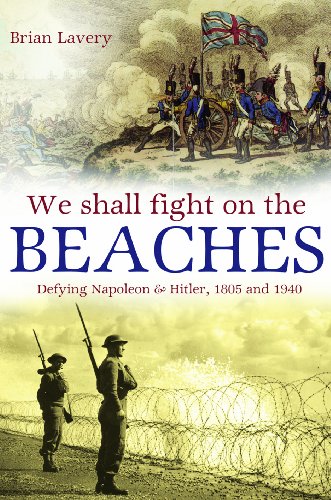 Brian Lavery, an established authority on the Napoleonic Wars and World War II, articulates the parallels and defining features of these tumultuous periods in our history. He looks at the style and competence of politicians and military commanders and the leadership and example of great men such as Horatio Nelson and Winston Churchill and examines unexplored official papers. He also considers the war situation as seen by such literary greats as Jane Austen and Evelyn Waugh, as well as the opinions of volunteers and servicemen. It provides a unique insight into two distinct periods during which the British national identity was forged and strengthened.

Brian Lavery is the guest curator of the exhibition Victory 250 at Chatham Historic Dockyard. He has written more than thirty books on maritime history including the highly successful Nelson's Navy and Empire of the Seas.