Items related to The Naval Institute Guide to Combat Fleets of the World,...

Wertheim, Eric The Naval Institute Guide to Combat Fleets of the World, 16th Edition: Their Ships, Aircraft, and Systems

The Naval Institute Guide to Combat Fleets of the World, 16th Edition: Their Ships, Aircraft, and Systems 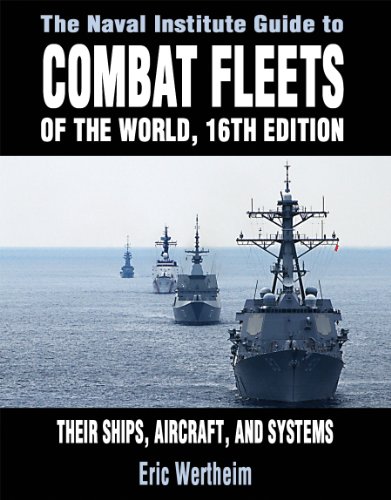 Called "the nation's premier naval reference book," Combat Fleets of the World is internationally acknowledged as the best one-volume reference to the world's naval and paranaval forces. Updated regularly since 1976, it has come to be relied on for all-inclusive, accurate, and up-to-date data on the ships, navies, coast guards, and naval aviation arms of more than 170 countries and territories. Large fleets and small maritime forces get equally thorough treatment. Comprehensive indexes make the book easy to use and allow for quick comparisons between ships and fleets. This new edition, the first in five years, presents timely information on major and even minor developments that could impact the world scene. More than four thousand illustrations and multi-view drawings present the user with the most detailed views available for identification and comparison purposes. Additional aids for the user include a section on how to use the book, lists of terms and abbreviations,an informative ship-name index, and more. An expanded chapter on the Chinese navy provides major updates on the status of their new aircraft carrier and the latest Chinese submarines, surface ships and naval missiles. Dozens of detailed line drawings depict exactly where weapons and sensors are located on the world's combatants such as the Iranian Ghadir-class submarines, the French Forbin-class destroyers, and the U.S. Navy's Littoral Combat Ships.The ship data section for each country provides full coverage of all ships, from the largest aircraft carriers to the smallest training and auxiliary craft. The vessels of the world's coast guards and customs services are given thorough treatment as well. But the book is much more than a ship encyclopedia. It includes information on the personnel strengths of each country's naval forces, major base locations, and details on maritime radar, sonar, naval aircraft, and weapon systems currently in service

Eric Wertheim is a defense consultant, columnist, and author specializing in naval and maritime affairs. Frequently interviewed by the news media, he has served as a speechwriter for Pentagon officials and a consultant to private industry and the U.S. government. He has been a columnist for Proceedings magazine since 1994. He lives in the Washington D.C. area.

This 16th edition of Combat Fleets of the World is an excellent instalment in a long-running series dating back to 1976 cataloguing the characteristics and capability of every naval platform in the world. Produced by Eric Wertheim, an internationally regarded expert in all things which fight on, under, and above the ocean, its imposing 1008 (A3-sized) pages of exhaustive detail will satisfy even the most inquisitive analysts and ardent enthusiasts. This is an excellent reference work representing good value for money. A must-have for those whose professional or personal interests necessitate detailed knowledge of war at sea. Intelligence and National Security

This book, edited by the Naval Institute Press, provides very complete information on navies from more than 170 countries, including organizational structure, personnel (including marines), major naval bases, ships and submarines (from the largest vessels to the smallest ones). support units), missiles, weapons, mines and torpedoes used, as well as specifications for radar, sonar, countermeasure and electronic warfare equipment, and other systems. O Velho General

"This book is a must for all naval enthusiasts." - The Navy: The Magazine of the Navy League of Australia

1. The Naval Institute Guide to Combat Fleets of the World, 16th Edition: Their Ships, Aircraft, and Systems

2. The Naval Institute Guide to Combat Fleets of the World: Their Ships, Aircraft, and Systems