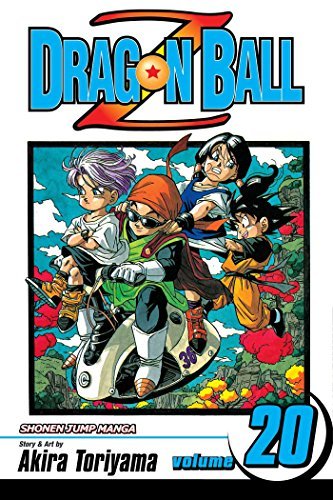 Dragon Ball Z fast-forwards into the future! Years after the battle with Cell, the Earth has forgotten about the existence of the super warriors, and Gohan is living the life of a mild- mannered high school student. Mild-mannered until evil strikes,that is...and the world needs the power of the Great Saiyaman!As Gohan's high school classmates ponder the similarity between their classmate and the masked crimefighter, two even stronger warriors prepare to make their names known. Their names are Goten and Trunks, and though they're not even out of elementary school, they may be the toughest things on the planet.

Akira Toriyama's first weekly series, Dr. Slump, has entertained generations of readers in Japan since it was introduced in Shueisha's Weekly Shonen Jump magazine in 1980. A few years later, he created his wildly popular Dragon Ball series, which brought him international success. Toriyama is also known for his character designs for video games, including Dragon Warrior, Chrono Trigger and Tobal No. 1.

Book Description Viz Media, Subs. of Shogakukan Inc, United States, 2009. Paperback. Condition: New. 1st Edition. Language: English. Brand new Book. After years of training and adventure, Goku has become Earth's ultimate warrior. And his son, Gohan, shows even greater promise. But the strikes are increasing as even deadlier enemies threaten the planet. More action-packed than the stories of Goku's youth, DRAGON BALL Z is the ultimate science fiction martial arts manga. Get ready for action as time travellers, aliens, deities and the mighty Super Saiyans clash over the fate of the universe! (In Japan, Dragon Ball and Dragon Ball Z were originally a single 42-volume series. VIZ Media's Dragon Ball Z contains vols. 27-42 of the original Japanese Dragon Ball, from the first appearance of Goku's son Gohan to the climax of the series.). Seller Inventory # BZV9781591168089

Book Description Paperback. Condition: New. 1st. Paperback. DRAGON BALL Z fast-forwards into the future Years after the battle with Cell, the Earth has forgotten about the existence of the super warriors, and Gohan is living the life of a mild-man.Shipping may be from multiple locations in the US or from the UK, depending on stock availability. 176 pages. 0.177. Seller Inventory # 9781591168089