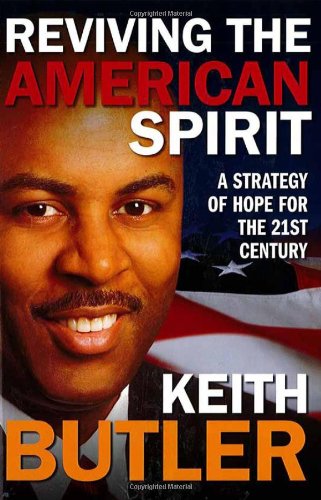 A CommonSenSe ApproACH to revive AmeriCA It is not too late to bring political, moral, social, and economical revival to the United States. That’s the loud and clear message of Keith Butler in Reviving the American Spirit. In his book, the successful African American pastor from Michigan, a staunch Republican running for the U.S. Senate in 2006, spells out his platform of traditional values and conservative views on a variety of issues, including immigration, taxation, education, legal reform, energy resources, and global threats. You will be challenged and stirred as Butler makes a thoughtprovoking argument concerning several controversial subjects. For example, he says that if African Americans knew history, they would all be Republicans. Additionally, he argues against abortion by providing its economic consequences. "Common sense is the underlying theme [of this book]," Butler writes. "It could almost be the title. I take a commonsense approach to my own life, and that carries over into my public life. Reviving the American Spirit is a commonsense-guided tour of the big issues that confront us today in the United States of America."

A strategY of hope for America Keith Butler is on a mission to reverse the moral and social decline in the United States. In Reviving the American Spirit, Butler presents his no-nonsense conservative views with balance and common sense on issues such as the protection of life, traditional marriage, and national security. This provocative book will explain: · How the government can legislate morally · Who suffers the economic consequences of abortion · What happens when the nuclear family is the fundamental building block of a healthy and stable society · Why free enterprise is the best tool for economic growth · Why faith-based organizations should continue to be allowed to partner with the government to help the poor and needy and to reform criminals and addicts Butler is not the first minister to run for the U.S. Senate, but his message couldn’t be timelier, and it’s one that will inspire and enlighten you.