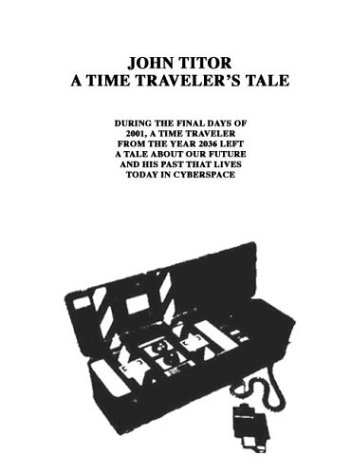 Perhaps one of the most amazing tales ever told, there is still debate online over this compilation of Internet posts made by a man claiming to be a real time traveler from our future. Is John Titor science fiction or science fact?

After a world war in our future, John Titor claimed to have used a military time machine to travel from the year 2036. His story spans from 1975 where his mission was to obtain a computer system needed in his future. For mysterious reasons, instead of going home, he came forward to visit with his family and young self in 1998.

From November of 2000 to March 2001, John spoke directly to numerous people on many Internet forums and chat rooms. In the posts, he discusses the future, the technology of time travel and his feelings about our society. Did he accurately predict the development of future physics, the reasons behind the Gulf War and the coming of mad cow disease to the U.S.?

John Titor A Time Traveler’s Tale, was compiled by John’s mother in our time and bound in a 5.5 x 8.5 paperback protected by a laminated front and back cover. With 164 pages of text, the book also contains 9 pages of black and white photos John posted of his time machine and the operations manual that came with it!

John’s mother in our time:

"John began posting online with my husband’s computer and email address. After about a week, he started using alternate names and Internet routes for his activity. We expressed concern about our security but he assured us we were safe. He said that not only would no one believe him but also the technology to locate him would not be used or could be defeated for a short period. He also had an unusual amount of trust with the people he spoke with online."

"You do not rewrite history. I can only affect what happens here just as easily as you can. Why do people in this time period worry so much about time travelers destroying their world line when they have no problem doing it themselves every day?"

"Imagine you live in the year 1900 and a "time traveler" attempts to explain how a jet engine works. Even though the invention of the airplane is only a decade in the future, he would have to find some frame of reference to explain the basics of flight. Then, he would have to outline the mechanics of how the engine works. As amazing as it would sound, the jet would be invented about thirty years later. "

"As far as war goes, I have faith you are quite capable of starting one all by yourself. I am hard pressed to accept any criticism on my outlook on that subject. Growing up might have been a vastly different experience for me than it was for most of you. Personal responsibility, determination, honor, friendship and self-reliance are not just words we try to live up to or fantasize about. "

"Perhaps I should let you all in on a little secret. No one likes you in the future. This time period is looked at as being full of lazy, self-centered, civically ignorant sheep. Perhaps you should be less concerned about me and more concerned about that."

"I like the incredible freedom you have on this world line but I see it as a trap and I fear the cost is the loss of your sense of connection with family and community. Yes, you can self actualize your ambitions but at what cost to the people around you, or yet to be born? The incredible availability of art, literature and limitless resources is hardly taken advantage of as I imagine the number of people sitting in front of their TVs. "