Items related to No Easy Victories 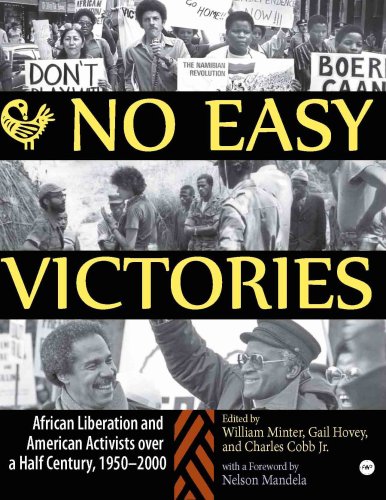 Tell no lies; claim no easy victories - Amilcar Cabral, 1965 African news making headlines in the U.S.A. today is dominated by disaster: wars, famine, HIV/AIDS. Americans who respond from Hollywood stars to ordinary citizens are learning that real solutions require more than charity. This book provides for the first time a panoramic view of U.S. activism on Africa from 1950 to 2000, activism grounded in a common struggle for justice. It portrays organizations, individual activists, and transnational networks that contributed to African liberation from colonialism and from apartheid in South Africa. In turn, it shows how African struggles informed U.S. activism including the civil rights and black power movements. Intended for activists, analysts, students, researchers, teachers, and anyone concerned with world issues, the authors draw on interviews, research and personal experience to portray the history and stimulate reflection on international solidarity today. The book includes an overview of the half century, short vignettes that feature key actors or events, photo documentation, and five chapters: The 1950s: Africa Rising by Lisa Brock, professor of history at Columbia College, Chicago and author of Between Race and Empire. The 1960s: Making Connections by Marianna (Mimi) Edmunds, teacher and film producer whose work includes ten years with 60 Minutes. The 1970s: Expanding Networks by Joseph F. Jordan, director of the Sonja Haynes Stone Center for Black Culture and History at the University of North Carolina (Chapel Hill). The 1980s: The Anti-Apartheid Convergence by David Goodman, author of Fault Lines: Journeys into the New South Africa and co-author of the bestseller Static. The 1990s: Seeking New Directions by Walter Turner, San Francisco Bay area activist, teacher and radio journalist with KPFA/Pacifica Radio.

Editors: William Minter, editor of AfricaFocus Bulletin, taught at the secondary school of the Mozambique Liberation Front in 1966-68 and 1974-76. He has worked as an independent scholar and activist since receiving his doctorate from the University of Wisconsin. His most recent book is Apartheid's Contras. Gail Hovey was among the founders of Southern Africa Magazine in 1964 and worked in South Africa 1966-67. She served as research director for the American Committee on Africa/Africa Fund, as managing editor at Christianity and Crisis, and as executive director of Grassroots International. Charles Cobb Jr., senior correspondent for allAfrica.com, was a field secretary for the Student Nonviolent Coordinating Committee (SNCC) in Mississippi in 1962-67. A journalist, he lived in Tanzania in the early 1970s. His books include Radical Equations, co-authored with Robert Moses, and Civil Rights Trail, to be published December 2007.

2. No Easy Victories: African Liberation and American Activists over a Half-Century, 1950-2000

6. No Easy Victories: African Liberation and American Activists over a Half-Century, 1950-2000

7. No Easy Victories: African Liberation and American Activists over a Half-Century, 1950-2000