Items related to African Christian Presence in the West

African Christian Presence in the West 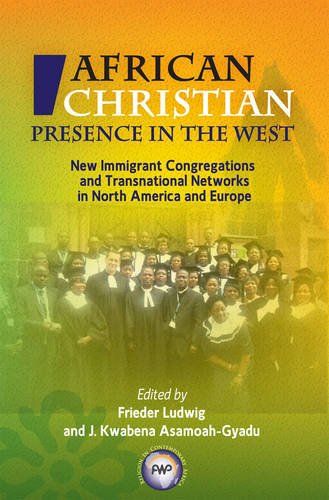 In the world today, migration makes up the greatest movement of people surpassing any other previous period in human history. In the last few decades, it has turned into a structural reality of contemporary society which according to some records now involves around 200,000,000 individuals. Moreover, the direction and composition of migrant movements have radically changed during the past fifty years. While until the late 1950s, international migration chiefly involved movement from the highly developed and economically and politically powerful nations to areas in the non-Western world, migrant movement since the 1960s has been predominantly from areas with weak economic and political systems to the centres of global dominance and advanced industrial growth. The new migration flows are characterised by dynamic back-and-forth movements. Bridges are maintained between the old country and the new. African immigrants constitute a vibrant sector in this movement. Indeed, the significance of African immigrants in the US has been highlighted by the election of President Barack Obama who is half Kenyan and half US-American by descent. However, with over 1,000,000 migrants a year and 299,000 asylum applications in 2006 alone, Europe is the primary destination for migrants worldwide. Since immigrants frequently react to the alienation and confusion that result from their uprootedness in religious terms, studies on migration experiences and of the processes of adaptation of religious communities to new environments are important issues. This volume is the first of its kind which represents research results both from North America and Europe. One contribution compares the experiences of Muslim and Christian immigrant groups, but in general the book is confined to the study of transnational dynamics in African Christianity. It includes a broad denominational spectrum from (Oriental) Orthodox, Roman Catholic, Protestant, to Pentecostal and Charismatic churches. While the contributors from Africa, North America and Europe represent a wide range of disciplines and methodological approaches, together they engage in an interdisciplinary exchange on the significant role of African Christians in the West in one volume; therefore the editors hope is that the book will stimulate comparative analyses and the creation of research networks.

Frieder Ludwig is director of the Mission Seminary in Hermannsburg and lecturer ( Privatdozent ) at the University of Göttingen. His research interests include the history of Christianity in Africa, the ecumenical movement, intercultural theology as well as Christian-Muslim relations and African Traditional Religions. He received his PhDs from Heidelberg and the University lecturing qualification (Habilitation) from Munich. Before coming to Hermannsburg, Ludwig had taught at Bayreuth University and Munich University in Germany, at Jos University in Nigeria and at Luther Seminary in St. Paul/Minnesota.. J. Kwabena Asamoah-Gyadu teaches Christianity in the Non-Western World, Pentecostal/charismatic Theology, Christology and New Religious Movements at the Trinity Theological Seminary, Legon, Ghana, where he is also currently Dean of Graduate Studies. He studied at the Trinity Theological Seminary, Legon; the University of Ghana, Legon; and the University of Birmingham, UK, where he gained his PhD in Theology in 2000. He has been Senior Research Fellow at the Center for the Study of World Religions, Harvard University (2004) and Schiotz Visiting Professor of African Christianity at Luther Seminary, St. Paul, Minnesota, USA.

1. African Christian Presence in the West