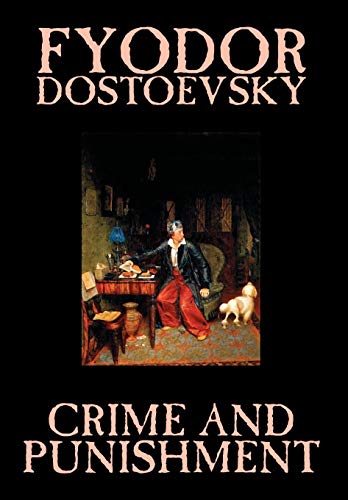 CRIME AND PUNISHMENT by Fyodor Mikhailovitch Dostoevsky is an unparalleled psychological study of the criminal mind, conscience, guilt and redemption, coupled with an examination of spiritual purity and devotion. The tension-filled story of Raskolnikov - a student who plans and executes the murder of an old moneylender -- of Sonia, the pitiful young woman from the streets who cares for him, and the inevitable events that follow is considered Dostoevsky's masterpiece.

CRIME AND PUNISHMENT
By Fyodor Dostoevsky
Translated By Constance Garnett

"Dostoevsky conceived the idea of Crime and Punishment in the summer of 1865, having lost all his money at the casino, unable to pay his bill or afford proper meals. At the time the author owed large sums of money to creditors, and he was trying to help the family of his brother Mikhail, who had died in early 1864. Projected under the title The Drunkards, it was to deal "with the present question of drunkness ... [in] all its ramifications, especially the picture of a family and the bringing up of children in these circumstance, etc., etc." Once Dostoevsky conceived Raskolnikov and his crime, now inspired by the case of Pierre FranÃ§ois Lacenaire, this theme became ancillary, centering on the story of the Marmeladov family.

Dostoevsky offered his story or novella (at the time Dostoevsky was not thinking of a novel) to the publisher Mikhail Katkov. His monthly journal, The Russian Messenger, was a prestigious publication of its kind, and the outlet for both Ivan Turgenev and Leo Tolstoy, but Dostoevsky, having carried on quite bruising polemics with Katkov in early 1860s, had never published anything in its pages. Dostoevsky turned as a last resort to Katkov, and asked for an advance on a proposed contribution after all other appeals elsewhere failed. In a letter to Katkov written in September 1865, Dostoevsky explained to him that the work was to be about a young man who yields to "certain strange, 'unfinished' ideas, yes floating in the air"; he had thus embarked on his plan to explore the moral and psychological dangers of the "radical" ideology. In letters written in November 1865 an important conceptual change occurred: the "story" has become a "novel", and from here on all references to Crime and Punishment are to a novel.

Dostoevsky had to race against time, in order to finish on time both The Gambler and Crime and Punishment. Anna Snitkina, a stenographer who would soon become his second wife, was a great help for Dostoevsky during this difficult task. The first part of Crime and Punishment appeared in the January 1866 issue of The Russian Messenger, and the last one was published in December 1866." - Wikipedia

Buy Used
All orders ship by next business... Learn more about this copy

Book Description Condition: VeryGood. All orders ship by next business day! This is a used hardcover book and shows signs of use. This hardcover book has no markings on pages. Dust jacket is included and may have wear and small tears. The cover/boards may have wear. The pages may have wear. The spine is in good condition. For USED books, we cannot guarantee supplemental materials such as CDs, DVDs, access codes and other materials. We are a small company and very thankful for your business!. Seller Inventory # 4CNO3J000EBI