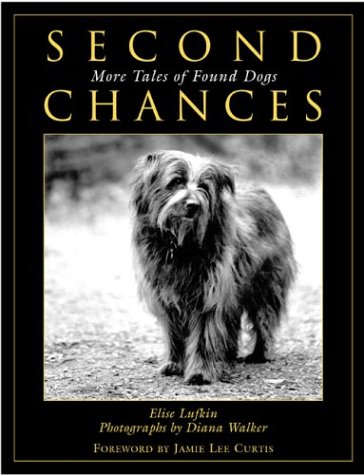 Every year, millions of dogs are abandoned-at animal shelters, racetracks, or on the side of the road. Many of these animals end their days without ever knowing a caring human hand, but some are fortunate enough to be found and given a second chance. And these dogs, often rescued from death's door, seem to have even more than the usual canine capacity for love and loyalty. Second Chances, is full of wonderful photos and words by people who have adopted dogs in myriad ways. Celebrities from Julio Iglesias, Mikhail Baryshnikov, Donna Shalala, and Oscar de la Renta to everyday heroes who have found dogs--from sleek greyhounds to scruffy mix-breeds--that have become service dogs, protectors, and friends, offering solace, aid, companionship and inspiration.

SECOND CHANCES is a moving tribute to the power of love between people and dogs-how that love has transformed dogs who were lost, and the people who were lucky enough to find them.

Millions of dogs and puppies are abandoned each year, resulting in a world filled with stray dogs of all breeds and sizes. Many of these strays come to a bad end, but every now and then a stray dog is found by a compassionate person – whether picked up on the street or picked out from an animal shelter – and given a second chance. Some of these dogs are lame, blind, ill or simply unwanted. These dogs are special. And so are the people who have chosen to give them a second chance. Found dogs seem to be especially grateful, loyal, and loving. They, who have sometimes been rescued from death's door, become beloved members of families, giving affection, companionship, and solace. They become productive members of society as service dogs, therapy dogs, and search-and-rescue dogs themselves. Observers might say that these dogs are lucky, but more often the people who have adopted them think that they are the lucky ones.
Second Chances is full of wonderful photos and words by people who have given dogs a second chance. Celebrities from Mikhail Baryshnikov to Oscar de la Renta and everyday heroes who have found dogs of all sorts – from sleek greyhounds to scruffy mutts – share their tales of discovery and canine-human friendship.
Second Chances is a tribute to these extraordinary dogs and their people. It is a testimony to the gift of love and salvation. And, in each case, it is difficult to say just who has saved whom.

ELISE LUFKIN has been involved with dogs all her life. For many years she worked with various animal shelters, socializing dogs to make them better candidates for adoption. She has been active in promoting humane education projects. Lufkin was one of the founders of New York City's Great American Mutt Show. She and her dog, Posy, are actice in a Pet Partners program and regularly visit residents at a nearby nursing home. They live in the mountains of central Idaho. The enthusuasm for her earlier book, Found Dogs: Tales of Strays Who Landed on Their Feet, inspired this sequel.

DIANA WALKER is a contract photographer for Time magazine. Her images have won prizes and have appeared in many major publications including People, Life, The New York Times Magazine and Paris Match. She is the author of Public & Private: Twenty Years Photographing the Presidency. Her work can be found in the collections of the Smithsonian's National Portrait Gallery, the Chicago Art Institute, the Minneapolis Museum of Art, and the Center For American History at the University of Texas. She lives in Washington D.C.