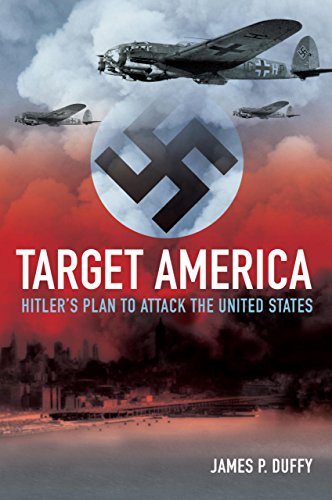 Did Hitler mean to pursue global conquest once he had completed his mastery of Europe? In this startling reassessment of Hitler's strategic aims, Duffy argues that Hitler fully intended to bring the war to America once he had achieved his ambitions in the Eurasian heartland. Detailed here for the first time are the Third Reich's plans for a projected series of worldwide offensives using the new secret weapons emerging from wartime research. Duffy also recounts other Axis schemes to attack American cities through the use of multistage missiles, submarine-launched rockets, and suicide missions against ships in the New York harbor. Taken together, these plans reveal just how determined the Axis powers were to attack the United States.

Whether or not German forces could even reach America has been long debated. What is certain is that Wehrmacht planners explored various options. In 1942, a secret plan was submitted to Hermann Göring for the use of long-range bombers against targets across the globe. The scheme, prepared by a select group within the Luftwaffe, is believed to be the result of direct discussions with Hitler. Long rumored to exist, this document was recently discovered in the military archives in Freiburg. Duffy provides the first detailed analysis of the plan and places it in the context of Germany's global war objectives.

Detailed here for the first time are the Third Reich's plans for a projected series of worldwide offensives using the new secret weapons emerging from wartime research.