Items related to The Running of the Bulls: Inside the Cutthroat Race...

Ridgway, Nicole The Running of the Bulls: Inside the Cutthroat Race from Wharton to Wall Street

The Running of the Bulls: Inside the Cutthroat Race from Wharton to Wall Street 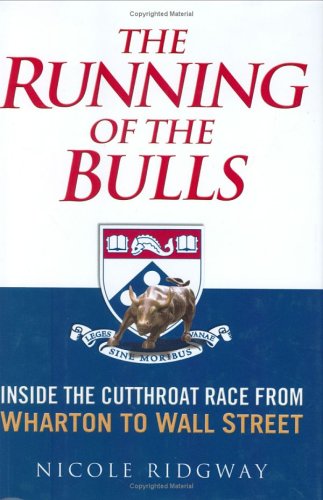 Shares the inside story of the highly competitive educational process of one of the nation's top undergraduate business universities, describing the experiences of six Wharton students from the class of 2004 who underwent a grueling recruiting seasons, day-long interviews, and stressful character assessments. 50,000 first printing.

Partly a coming-of-age tale, partly a survey of job options for recent college graduates at the high end of society's bell curve, and partly a snapshot of a particular school and its culture, The Running of the Bulls offers many things to different readers. The book centers on stories gleaned by journalist Nicole Ridgway during the 2003-2004 school year from undergraduate students at Wharton, the University of Pennsylvania's business program. Ridgway certainly succeeds in getting close to the students: at times, the narrative feels like reality TV in literary format. Readers are treated to gritty, in-depth narratives around career searches by six Wharton students.

The six students profiled by Ridgway are intended as a cross-section of the overall Wharton class: hungry, ambitious, and surprisingly career-oriented for such young people. Hippies these are not. Readers follow the six students as they pursue entry-level assignments at the elite fixtures of modern American business: investment banking on Wall Street (for example, Goldman Sachs and Lazard Freres, Citigroup, Lehman Brothers); industry (L'Oreal, Johnson and Johnson, General Mills, Microsoft); entrepreneurism ("One Stop College Shop"); nonprofits (Peace Corps, IMF, and World Bank); and of course, consulting (McKinsey, Bain, BCG). The diversity of the six students' career considerations, as well as their gender and ethnic mix will lead many readers to find one or another of the characters with whom they feel most sympathetic.

The book's strength lies in its rich detail: students who've recently gone through or will go through the job-hunting process will easily recognize Ridgway's stories about nerve-wracking interviews, the negotiating dance around job offers, and the experience of internships. In particular, students who want a feel for the Penn campus and the Wharton program will relish the details of the physical environment, as well as the sometimes blow-by-blow accounts of interviews faced by the eager-beaver job seekers. If you want to understand what kinds of interview questions Microsoft asks its college hires, or how white-shoe Wall Street firms treat their summer interns after the offer letters are signed and first-day orientation ends, this book is for you. That said, Ridgway supplements this anecdotal detail with macro-level perspective, too. HR professionals and currently employed workers, for example, may be interested in the average compensation of Wharton graduates in 2003-2004--an impressive $50K base salary, and nearly $20K in various bonuses.

Running with the Bulls follows a chronological format, so that readers follow the six students through the school year. Starting with resume submission, going through interviews, in some cases trying internships, and then ultimately ending with full-time jobs, the Wharton class's experiences show the ups and downs faced by young career seekers. In the end, entrepreneurs and nonprofit fans may be disappointed, but perhaps not surprised, to find that all six of the book's subjects, end up in Establishment-oriented jobs, but with this story, the journey, rather than the proverbial final destination, proves to be the most interesting part. --Peter Han

"Nicole Ridgway captures the intensity, competition, and drive that Wharton's top undergraduates bring to their college experience. They set the standard - even for their professors and Wharton MBA students. If you are looking for a reason why America may retain its premier place in the global economy, read this book!"
-G. Richard Shell, author of Bargaining for Advantage: Negotiation Strategies for Reasonable People and Professor of Legal Studies and Management at the Wharton School

"The contestants? The bright, accomplished, and altogether winsome students at one of the best business schools in the country. The prize? A job at a consulting firm or investment bank that can make the few who win it very, very rich. The name of the game? The Running of the Bulls, and it can get ugly. Hugely informative and supremely entertaining, this is a marvelous book."
-Peter Robinson, author of Snapshots From Hell: The Making of an MBA

1. The Running of the Bulls

2. The Running of the Bulls: Inside the Cutthroat Race from Wharton to Wall Street

3. The Running of the Bulls

4. The Running of the Bulls

5. The Running of the Bulls: Inside the Cutthroat Race from Wharton to Wall Street

6. The Running of the Bulls: Inside the Cutthroat Race from Wharton to Wall Street

7. The Running of the Bulls: Inside the Cutthroat Race from Wharton to Wall Street Ridgway, Nicole