Items related to Why Good People Do Bad Things: Understanding Our Darker... 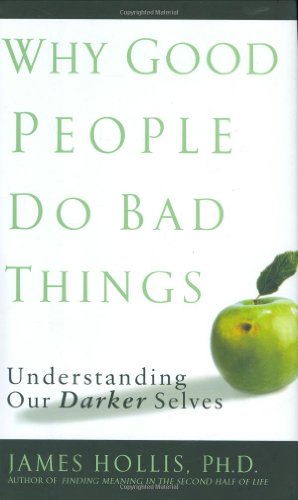 The author of Finding Meaning in the Second Half of Life offers insight into how to resolve disparities between one's values and one's actual actions, introducing the Jungian concept of a divided soul while explaining how readers can become more self-aware by accepting the less favorable elements of their personalities.

James Hollis received an A.B. from Manchester College and a Ph.D. from Drew University. He taught humanities for twenty-six years in various colleges and universities before becoming a Jungian Analyst at the Jung Institute in Zurich, Switzerland, where he received a diploma in Analytical Psychology. He has a private analytic practice and is Executive Director of the Jung Educational Center of Houston.

Jungian psychologist Hollis turns the whole why-bad-things-happen-to-good-people question around and asks, instead, why good people often do such horrible things. Exploring the notion of the Shadow, Jung's term to describe the hidden aspects of ourselves--the parts that contradict the self we show the rest of the world, the dark side of our personality--Hollis suggests that we can only become whole (and good) by acknowledging our Shadow and accepting that it's OK to have a dark side, as long as we never let it take control of who we are. The prose is a little stodgy, and some readers might find the book feels a little too similar to others in the psychological self-help genre, but finally the similarities are only superficial. The difference between this book and most of the slick self-helpers is that Hollis has some genuinely important, meaningful things to say. A thoughtful book, well worth the concentration involved in reading it. David Pitt
Copyright © American Library Association. All rights reserved