Items related to American Band: Music, Dreams, and Coming of Age in...

Laine, Kristen American Band: Music, Dreams, and Coming of Age in the Heartland

American Band: Music, Dreams, and Coming of Age in the Heartland 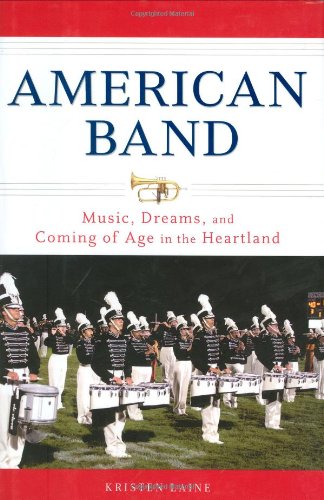 Traces the story of the Marching Minutemen marching band state champions from Concord Community High School in Indiana, describing the conflicts between faith and purpose faced by its legendary director, the band's perfectionist-level pursuits, and the experiences of its sectional leaders.

Thirty years after she marched in an Indiana high school band, Kristen Laine returned to the state, moving her family from New Hampshire to Elkhart to immerse herself in the story of the Concord High School Marching Minutemen. She is an award-winning journalist whose commentaries can be heard on Vermont Public Radio.

American Band has everything going for it, from tempo to heart to the grand bittersweet finale. What a gift for readers: a pitch-perfect tribute to kids and song and community. -- Madeleine Blais, Pulitzer Prize winner and author of In These Girls, Hope Is a Muscle

American Band is a compelling story of young people finding their voices, their callings, and their rhythm. In Kristen Laine's hands, the unfolding highs and lows of a group of high school musicians becomes an unlikely but utterly convincing venue for relating universal experiences: learning to love, learning from loss, struggling with faith.... In other words, growing up. With remarkable empathy and skillful prose, Laine not only grants access to the lives of the teenagers whose stories she so poignantly tells, she actually makes the reader nostalgic for high school, for that time when we dreamed big dreams and loved our friends as if the music of life depended on them. Best of all, while American Band will surely be relished by those who have glide-stepped to 'Take the A Train,' it invites even those of us who wouldn't know a piccolo from a pipe organ to take the field and march along. -- Peter Manseau, author of Vows: The Story of a Priest, a Nun, and Their Son

A triumph! American Band is an incisive portrait of life and coming of age in our 'heartland' - a place so many of us feel free to ridicule and analyze, but so rarely take the time to truly comprehend. Kristen Laine pushes right through the stereotypes about 'red states,' 'evangelicals,' and the nature of life in the middle of our nation. American Band, is, in one sense, a well-paced page-turner in the great tradition of 'competition' narratives. But it is also much more. Kristen Laine has blessed us with a deeply serious, life-affirming book whose quiet insight and wisdom will stay with the reader many years after those pages have been turned.... -- Susan Eaton, author of The Children in Room E-4: American Education on Trial

As a spats-hating, apathetic, marching-band clarinetist in high school, I didn't recognize the driven and talented Concord High musicians who train harder than the football players at whose games they perform. But American Band is much more than the story of a season in the life of the most fanatical practitioners of this uniquely American ritual. Kristen Laine has produced a captivating portrait of what it's like to be a teenager in middle America in the first part of the 21st century. -- Stefan Fatsis, author of Word Freak: Heartbreak, Triumph, Genius, and Obsession in the World of Competitive Scrabble Players

Football isn't the only thing happening underneath those Friday night lights. American Band leads us through the championship season of Elkhart, Indiana's Marching Minutemen. But most importantly, author Kristen Laine shows that in the heart of the heart of the country, so-called quaint notions like 'community' and 'personal excellence' are alive and kicking. -- Cathy Day, author of The Circus in Winter

Through the graceful narration of Kristen Laine, a season of a high school band becomes the provocative story of young men and women grappling with issues of friendships, ambition, and spirituality. American Band transports us to the real America that so many journalists simply fly over. It makes us care us care deeply about the parents, kids and teachers who come together to create a sense of community in these fast-changing times. -- David L. Marcus, author of What It Takes to Pull Me Through: Why Teenagers Get in Trouble, and How Four of Them Got Out

1. American Band: Music, Dreams, and Coming of Age in the Heartland