Items related to Bonobo Handshake: A Memoir of Love and Adventure in...

Woods, Vanessa Bonobo Handshake: A Memoir of Love and Adventure in the Congo

Bonobo Handshake: A Memoir of Love and Adventure in the Congo 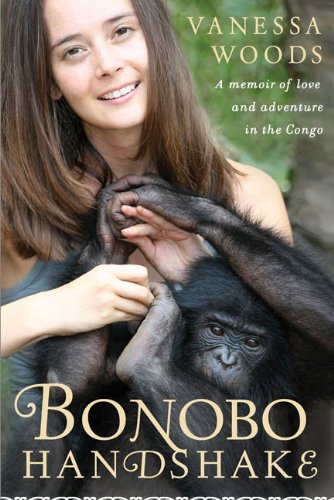 A young woman follows her fiancé to war-torn Congo to study extremely endangered bonobo apes-who teach her a new truth about love and belonging.

In 2005, Vanessa Woods accepted a marriage proposal from a man she barely knew and agreed to join him on a research trip to the Democratic Republic of Congo, a country reeling from a brutal decade-long war that had claimed the lives of millions. Settling in at a bonobo sanctuary in Congo's capital, Vanessa and her fiancé entered the world of a rare ape with whom we share 98.7 percent of our DNA. She soon discovered that many of the inhabitants of the sanctuary-ape and human alike-are refugees from unspeakable violence, yet bonobos live in a peaceful society in which females are in charge, war is nonexistent, and sex is as common and friendly as a handshake.

A fascinating memoir of hope and adventure, Bonobo Handshake traces Vanessa's self-discovery as she finds herself falling deeply in love with her husband, the apes, and her new surroundings while probing life's greatest question: What ultimately makes us human? Courageous and extraordinary, this true story of revelation and transformation in a fragile corner of Africa is about looking past the differences between animals and ourselves, and finding in them the same extraordinary courage and will to survive. For Vanessa, it is about finding her own path as a writer and scientist, falling in love, and finding a home.

A young woman follows her fiancé to war-torn Congo to study extremely endangered bonobo apes---who teach her a new truth about love and belonging.

Vanessa Woods is a research assistant, journalist, and author of children’s books. A member of the Hominoid Psychology Research Group, she works with Duke University as well as Lola Ya Bonobo in Congo. She is also a feature writer for the Discovery Channel, and her writing has appeared in publications such as BBC Wildlife and Travel Africa. Her first book, It’s Every Monkey for Themselves, was published in Australia in 2007. Woods lives in North Carolina with her husband, scientist Brian Hare.

1. Bonobo Handshake: A Memoir of Love and Adventure in the Congo

2. Bonobo Handshake: A Memoir of Love and Adventure in the Congo

3. BONOBO HANDSHAKE: A MEMOIR OF LO

4. BONOBO HANDSHAKE: A MEMOIR OF LO