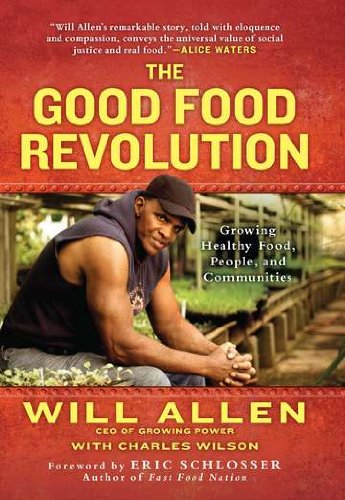 A pioneering urban farmer and MacArthur “Genius Award” winner points the way to building a new food system that can feed—and heal—broken communities.

The son of a sharecropper, Will Allen had no intention of ever becoming a farmer himself. But after years in professional basketball and as an executive for Kentucky Fried Chicken and Procter & Gamble, Allen cashed in his retirement fund for a two-acre plot a half mile away from Milwaukee’s largest public housing project. The area was a food desert with only convenience stores and fast-food restaurants to serve the needs of local residents.

An eco-classic in the making, The Good Food Revolution is the story of Will’s personal journey, the lives he has touched, and a grassroots movement that is changing the way our nation eats.

After retiring from professional basketball and executive positions at Kentucky Fried Chicken and Procter & Gamble, Will Allen became the CEO of Growing Power. He lives in Milwaukee. Charles Wilson is a journalist and the coauthor with Eric Schlosser of the #1 New York Times bestselling children's book Chew on This: Everything You Don't Want to Know About Fast Food.

She held a one-way ticket.

In December of 1934, my mother, Willie Mae Kenner, stood in the waiting room for colored people at the train station in Batesburg, South Carolina. She was twenty-five years old. Her two young boys, my older brothers, were at her side. She was heading to Union Station in Washington, D.C. She was trying to escape our family’s long history in agriculture.

I imagine her on this day. Willie Mae was known to be beautiful and headstrong. Many local men had called her “fine”—she had strong legs, smooth skin, a round and lovely face, and thoughtful eyes. She also had dreams that were too big for her circumstances. She and her husband, and seven of her nine siblings, were sharecroppers: tenant farmers who gave up half of the crop they planted and harvested each season in exchange for the right to pick it. It was the only life that she had known.

My mother held different hopes in her heart, both for herself and her children. She had fought to obtain a teaching degree from Schofield Normal and Industrial School, a two-year college initially set up after the Civil War by Quakers, to educate free slaves. She wanted to be a teacher. Her family noticed that when she was required to pick cotton or asparagus, she did the work without complaint. Yet she wore a long, flowing dress on top of her work shirt and pants while in the fields. It was as if she wanted to find a way to give grace and dignity to work that often provided neither.

From the train station in Batesburg, Willie Mae was trying to escape asparagus and cotton. At the time, the South was still in the thrall of “Jim Crow”: the rigid set of laws set up after the Civil War to separate whites and blacks in almost every part of public life. The 1896 Supreme Court decision in Plessy v. Ferguson—allowing “separate but equal” facilities for black people—meant that my mother could not share the same train car with white passengers. She and her children could not even wait in the same area for the train to come. Her train car sat directly behind the coal car, where men shoveled the rocks into the roaring engine. The smoke of the engine blew through the car’s windows and seeped into her clothes. She and her two boys would need to use a bathroom marked not “Men” or “Women” but “C,” for “Colored.”

Her journey was to take her to the nation’s capital, where Willie Mae planned to reunite with her husband, James Kenner. His friends called him “Major,” for reasons I never understood. He had left South Carolina after falling into debt. During the Great Depression, the price for cotton had dropped to only 5 cents a pound— down from 35 cents only a decade earlier. Major had found himself owing more to his landowner at the end of the planting season than when he began it. Sharecropping had begun to feel like slavery under another name.

“There’s no money here,” he told my mother shortly before leaving.

Major found a small place to live in Ken Gar, an all-black neighborhood on the edge of Kensington, Maryland, ten miles from the White House. He sent word to my mother to come. Major was now building houses instead of planting crops. Willie Mae had never seen the place she was going to call home.

My mother left the South before I was born. I know from relatives that she decided against boarding her departing train at the nearest station, in Ridge Spring, likely out of concern that local people would talk about her. When I was growing up, she rarely spoke of her Southern past, as if it were a secret that was best not talked about in polite company. She told my brothers and me that she liked the taste of every vegetable except asparagus—she simply had picked too much of it.

I have wondered what passed through her mind when the train pulled out of Batesburg. As the locomotive edged north out of South Carolina, she would have seen from the windows the life she had known. She would have seen the long-leaf pine trees, the sandy soil, and the fields that yielded cotton and parsnips and cabbage and watermelon. She would have seen other sharecroppers at work, their clothing heavy with sweat.

Willie Mae knew how to sustain her family in South Carolina. She had learned from her mother how to bed sweet potatoes and garden peas and cabbage and onions in the early spring. When the full heat of summer came, she had learned how to plant turnips and eggplants and cucumbers and hot peppers and okra and cantaloupes. She had learned how to take all the parts of a hog that the men slaughtered and turn it into souse (a pickled hog’s head cheese), scrapple (a hog meatloaf), liver pudding, or a dish called “chitlin’ strut”—fried pig intestines. She had learned in the late autumn how to can peaches and sauerkraut and pecans and yams for the cold season.

She was leaving for a city where it was uncertain if any of the skills she had—or any of the dreams she harbored—would matter.

Book Description Condition: New. This is a brand new book! Fast Shipping - Safe and Secure Mailer - Our goal is to deliver a better item than what you are hoping for! If not we will make it right!. Seller Inventory # 1XGDJP0013YY

Book Description Hardcover. Condition: New. This is a brand new book! Fast Shipping - Safe and Secure Mailer - Our goal is to deliver a better item than what you are hoping for! If not we will make it right!. Seller Inventory # 1XGDJP0013YY_ns