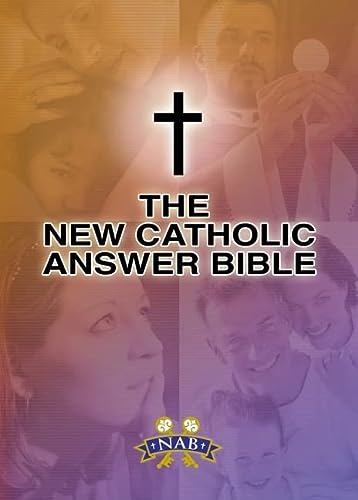 ***NOTE: This Bible is a New American Bible Revised Edition (NABRE) but the cover design would say NAB****

No book in the history of the world has wielded as much influence on humankind as the Holy Bible.

What makes The New Catholic Answer Bible so unique is the answers to questions about Catholic beliefs and practices and their foundation in Scripture. From Where Did the Bible Come From? and Are the Seven Sacraments in the Bible? to Are Catholics Born Again ? and Why Do Catholic Bibles Have Seventy-three Books?, these eighty-eight diverse topics answer tough questions Catholics are asked.

The New Catholic Answer Bible is perfect for those who want to:

The New Catholic Answer Bible is a wonderful gift for a family member or friend who is in the Rite of Christian Initiation of Adults (RCIA) or has recently joined the Church.

Dave Armstrong is a Catholic apologist and author (convert from evangelical Protestantism in 1991). His conversion story is in "Surprised by Truth" (1994). He's been published in "The Catholic Answer," "This Rock," "Envoy," and other periodicals. Dave's many radio appearances include "Catholic Answers Live" and "Faith & Family Live."

Dave was the co-author (with Dr. Paul Thigpen) of "The New Catholic Answer Bible" (Our Sunday Visitor: 2005), and editor for "The Wisdom of Mr. Chesterton: The Very Best Quotes, Quips, and Cracks from the Pen of G. K. Chesterton" (Saint Benedict Press / TAN Books: 2009) and author of "100 Biblical Arguments Against Sola Scriptura" (Catholic Answers, 2012).

He has been happily married to Judy since October 1984; they have three sons and a daughter and reside in metro Detroit.

Book Description Paperback. Condition: New. Paperback. No book in the history of the world has wielded as much influence on humankind as the Holy Bible. What makes The New Catholic Answer Bible so unique is the answers to questions about Catho.Shipping may be from multiple locations in the US or from the UK, depending on stock availability. 2008 pages. 1.066. Seller Inventory # 9781592761869